Each year, L’Oréal Paris and Points of Light recognize, celebrate and support Women of Worth who make a beautiful difference in their communities. For exceptional commitment to service, 10 honorees each receive a $10,000 grant to support their most cherished cause. One honoree, selected during the open online vote, receives an additional $25,000 grant. 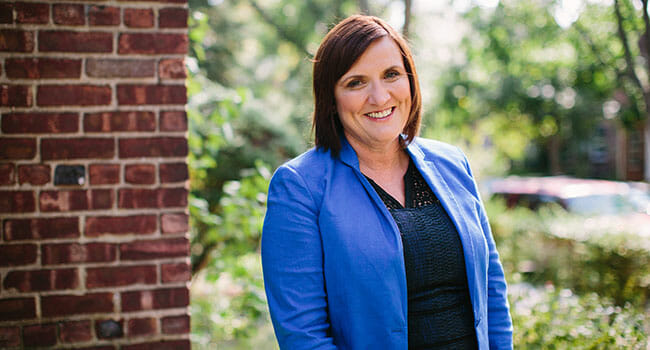 “If this had happened to me or to Rory’s dad, Rory would have been saying, ‘Mom, Dad, we have to do something,’” said Orlaith Staunton, who lost her son, Rory, to sepsis in 2012. “We can’t bring Rory back, but it has become a mission for us to have people in our community and all over the U.S. … be able to recognize the signs and symptoms of sepsis, so they can advocate for their own care with doctors and healthcare professionals.”

Rory, a bright, ambitious 12-year-old, scraped his arm at school, where a bandage was applied to what was a minor injury. When Rory developed a fever and complained of feeling ill along with pain in his leg, his parents took him to see his pediatrician.

The physician suspected it was a stomach virus that was going around that “was nothing to worry about.” The family followed the doctor’s suggestion to have Rory get rehydrated via intravenous fluids at the hospital. The ER staff also thought it looked like stomach flu and saw no need to admit Rory. But the next day, Rory’s fever continued and he felt extremely ill. That night, he was admitted to the intensive care unit, where he died two days later.

When the grieving Stauntons learned that communication had broken down among the pediatrician, hospital staff, and lab – where blood tests had flagged a problem – they vowed, “Never again.” The couple established the Rory Staunton Foundation for Sepsis Prevention and dedicated themselves to educating both medical professionals and the general public in hopes of preventing similar tragedies.

They also formed the National Council on Sepsis, a nationwide support group for families affected by sepsis that is bringing together a network of volunteers to raise awareness and to push for legislation that mandates hospital protocols for treating patients with signs of sepsis.

Sepsis kills more than 250,000 Americans every year; yet, Staunton’s organization discovered that 60 percent of Americans have never heard of it. That’s because it’s almost always listed as flu, pneumonia, or something else on death certificates and medical records. “Whenever you see ‘complications of,’ such as ‘complications of pneumonia,’ that’s usually sepsis,” said Staunton. In some areas, medical examiners list the cause of death as either cardiac death or brain death, without elaborating on what caused the heart or brain to stop functioning.

Sepsis can cause serious illness or death very quickly, so early diagnosis is crucial. Early symptoms may begin at home, at work, or at school as an infection takes hold. Staunton said the Centers for Disease Control and Prevention used to think most sepsis infections were acquired in hospitals, “but then they discovered that nearly 65 percent of sepsis cases actually have it when they walk in the door of the hospital – so it’s community acquired.”

People over 65 are more susceptible to sepsis, notes Staunton: “There is a higher level of mortality if someone is transferred from say, a nursing home to a hospital, and a lot of the time, that’s because they are septic. This underscores the need for nursing home staff, in-home caregivers, and first responders also to know about and watch for early symptoms of sepsis.”

The seriousness of sepsis is compounded by lack of awareness. The Stauntons know hundreds of people in their New York community through their restaurants and bars in Manhattan and Queens, as well as by being active in their children’s school. “Yet not one person had heard of sepsis when Rory died,” recalled Staunton.

Martin Doerfler, a critical care physician who serves as a medical advisor to the Rory Staunton Foundation, said many doctors were taught a definition of sepsis that refers to much sicker patients. He agreed that sepsis is best diagnosed in the emergency department or doctor’s office, instead of in intensive care units, but described it as “a condition that is hard to recognize when it’s easy to treat and hard to treat when it’s easy to recognize.”

“We have, certainly for the last 30, 40, or 50 years, focused on the ‘easy to recognize, hard to treat’ phase,” said Doerfler. “We really need to move upstream and keep people from getting it.”

Staunton’s efforts to raise awareness of sepsis have already had a far-reaching impact. In January 2013, less than a year after Rory’s death, the state of New York adopted a mandated set of protocols, known as Rory’s Regulations, that require hospitals to screen patients suspected of sepsis and to expedite prompt treatment with antibiotics.

“You administer the fluids, you take a blood test, and you administer broad-spectrum antibiotics, and then you wait to see if there is infection there,” said Staunton.

The legislation also includes a Parents’ Bill of Rights that ensures parents’ right to know the results of blood tests and their child’s diagnosis, and that the hospital will communicate with the child’s primary care physician.

“They estimate Rory’s Regulations will save 5,000 to 8,000 New Yorkers every year,” Staunton added. “We are trying to push that into other states, so we established the National Council on Sepsis.”

Rory’s story has been shared in the media, including The New York Times, the Today Show, and Dr. Oz, alerting many thousands of readers and viewers to the dangers and symptoms of sepsis. Staunton has reached out extensively to the medical community through conferences, webinars, blogs, and forums, and is working closely with the American Academy of Pediatrics.

Chris Aiello of Pennsylvania said the Rory Staunton Foundation has given him “purpose and a voice” after he lost his daughter, Emily, to sepsis last year at age 14. Emily developed a blood infection following surgery. “Somehow they missed it,” said Aiello, who is now campaigning for legislation similar to Rory’s Regulations to be enacted in his state. “Orlaith and I both know we can’t bring our children back, but she has given me something to follow and to believe in. There are things we can do to save other lives.”

Staunton knows that a big part of the fight against sepsis is prevention and early detection. She also knows, as a mother – the Stauntons also have a daughter, Kathleen – that parents learn a lot from their children around the dinner table as they discuss, “What did you learn in school?”

A local teacher was so moved at Rory’s funeral that she developed a pilot curriculum for middle and high school classrooms in New York. Schools around the country are welcome to contact the Rory Staunton Foundation for information on the module. “Younger children can be taught in a fun way to wash their boo-boos” to avoid infection, said Staunton.

In addition to reaching out to schools and youth groups, such as Boy Scouts, Staunton maintains a Facebook page that has attracted more than 14,000 followers. “It’s become a place where people talk, and that’s what we want,” said Staunton. “When Rory died, we didn’t know what support we had, and we want people to know that there is support out there.”

If Staunton were to win additional funding through the L’Oréal Paris Women of Worth program, she said she would use it to expand awareness of sepsis. “I would like to put together a program for kids ages 7 to 17,” said Staunton. “It would have a very empowering video. I would also have age-specific activities they could do, such as challenges and quizzes. Central to that would be that the older participants would raise community awareness and in doing so develop their own leadership skills. We would make first-aid kits and information packets available.”

Staunton, who is originally from Ireland, worked for years to help young people plan exciting experiences in international travel and student exchange programs. Her husband, also from Ireland, works for immigration reform in addition to running successful restaurants. Neither ever thought they’d find themselves advocating for prevention of a deadly medical issue. “It’s a lot of work,” said Staunton. “But when we started this, my daughter said, ‘Why did nobody do this for Rory?’ And so we know we’re doing the right thing.”

Show your support for Orlaith Staunton by voting for her, and learn more about the other extraordinary L’Oréal Women of Worth honorees.