In 2009, Bill Muckerman, a sales executive from Mooresville, N.C., decided he wanted to devote some of his free time to volunteer work. He approached the community service organization Hands On Charlotte and since then has become one of its star volunteers, having logged more than 500 volunteer hours. In addition, he volunteers dozens of hours each year for other community projects in the Charlotte area. 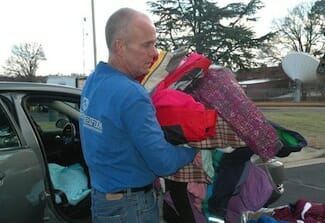 Of the programs he discovered through Hands On Charlotte, a HandsOn Network affiliate that matches volunteers with local projects, Muckerman has become most active in Special Rollers, a bowling league for teens and adults with developmental or physical disabilities. Saturdays, Muckerman oversees two bowling lanes, where he assists seven to nine members of the league.

“I’ve been doing it long enough that many of the bowlers know me and want to bowl on my lanes,” says Muckerman, who has volunteered around 145 Saturdays with Special Rollers. “I work with many of the same people every week, and it’s very gratifying. Mooresville is 30 minutes from Charlotte, so it takes up a fair part of my Saturday to participate. But when I get home, I always feel good.”

Inspired by Hands On Charlotte’s work, Muckerman started a community service project of his own. He had learned that Hands On Charlotte volunteers took part in Steve’s Coats for Kids, an annual winter clothing drive sponsored by a local television station to support the Crisis Assistance Ministry Free Store.

“My home in Mooresville is beyond the suburbs of Charlotte, so it seemed like a great area to gather more coats,” says Muckerman.

Muckerman launched his own Brawley Peninsula Coat Drive. For five years, Muckerman has left self-made flyers at homes in the Brawley Peninsula neighborhood of Mooresville. Neighbors leave coats at Muckerman’s home, and he drives out to make pick-ups. In his first year, 2009, Muckerman collected 182 coats. In 2014, he delivered more than 400 coats and other winter clothing items to Steve’s Coats for Kids.

Hands On Charlotte also introduced Muckerman to the Race Against Hunger project at Charlotte’s Second Harvest Food Bank, which provides food to social service agencies in 19 counties. Muckerman has volunteered on more than 50 occasions to sort food delivered by large grocery chains to the Second Harvest warehouse. He also volunteers many additional hours each year directly for Second Harvest.

Muckerman says he is grateful that Hands On Charlotte helped get him active in volunteerism, and that he is now committed to community service.

“All the volunteers I’ve talked to say they benefit more than the people they help, and I agree,” says Muckerman. “I feel good about the people I help.”