Today, the International Day of Zero Tolerance for Female Genital Mutilation, we honor Jaha Dukureh with the Daily Point of Light Award. Read her story and nominate someone you know as a Point of Light. 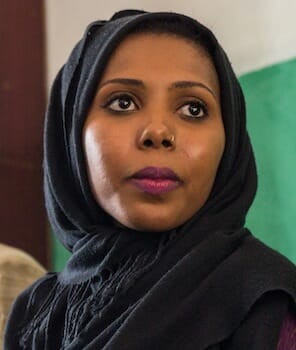 When Jaha Dukureh was 15, she moved from the West African nation of Gambia to the United States for an arranged marriage. Prior to her move, Dukureh was forced to undergo the most severe form of female genital mutilation and had to be surgically reopened upon her marriage.

The World Health Organization describes female genital mutilation, or FGM, as “partial or total removal of the external female genitalia, or other injury to the female genital organs for nonmedical reasons” and calls the practice an “extreme form of discrimination against women.”

To help girls and women who have suffered like her, Dukureh founded Safe Hands for Girls, an Atlanta-based, grassroots organization against female genital mutilation.

“As a woman and knowing the effects this practice had on me, it was very important for me to break the taboo and culture of silence,” said Dukureh, now 25. “I know how painful this practice is and what it has taken from me, and I don't want to see any women experience what I have endured.”

Dukureh travels the country to speak to communities affected by female genital mutilation. She also presents workshops and seminars at universities to raise awareness about FGM occurring in America.

FGM is often perceived as a problem that only happens in faraway places like Africa. But in the United States, young girls from immigrant communities – from countries where FGM is a cultural or religious coming-of-age ritual – are subject to the practice.

Safe Hands for Girls supports survivors with legal aid, connects them with referral services and has created support groups for FGM survivors around the country.

“I started Safe Hands for Girls because as a survivor of FGM, I know how hard it was for us and having to deal with alone and I knew I needed to speak up and support other survivors,” she said.

Dukureh has been instrumental in awakening public interest in the campaign against FGM in the United States. Her work includes national media outreach and formidable campaign work that preceded the passage of the Girls’ Protection Act of 2010, sponsored by U.S. Rep. Joseph Crowley of New York. Dukureh also launched a petition on Change.org calling for the Obama administration to develop a strategic plan to end FGM; the petition currently has more than 220,000 supporters.

Meanwhile, Dukureh’s work has inspired a new generation of survivors who are breaking the cycle from mother to daughter. She now trains other survivors to be advisers in their own communities.

“Women's empowerment is allowing women to enjoy their God-given rights to sexuality, health and freedom,” Dukureh said. “We were born free and perfect.”

If you are interested in helping Jaha Dukureh put a stop to FGM, follow Safe Hands for Girls on Twitter, @SafeHands4Girls and see what you can do.