Hunger isn’t just a global problem — it’s the “world’s dumbest problem.” At least, that’s how Komal Ahmad, founder and CEO of COPIA, sees it anyway. She’s making it her life’s mission to eradicate it one city at a time with technology that seamlessly delivers excess food from restaurants, grocery stores, companies, and events to people in need. Her company has already helped to feed hundreds of thousands of people in the San Francisco Bay area, and it expects to feed over a million this year alone. 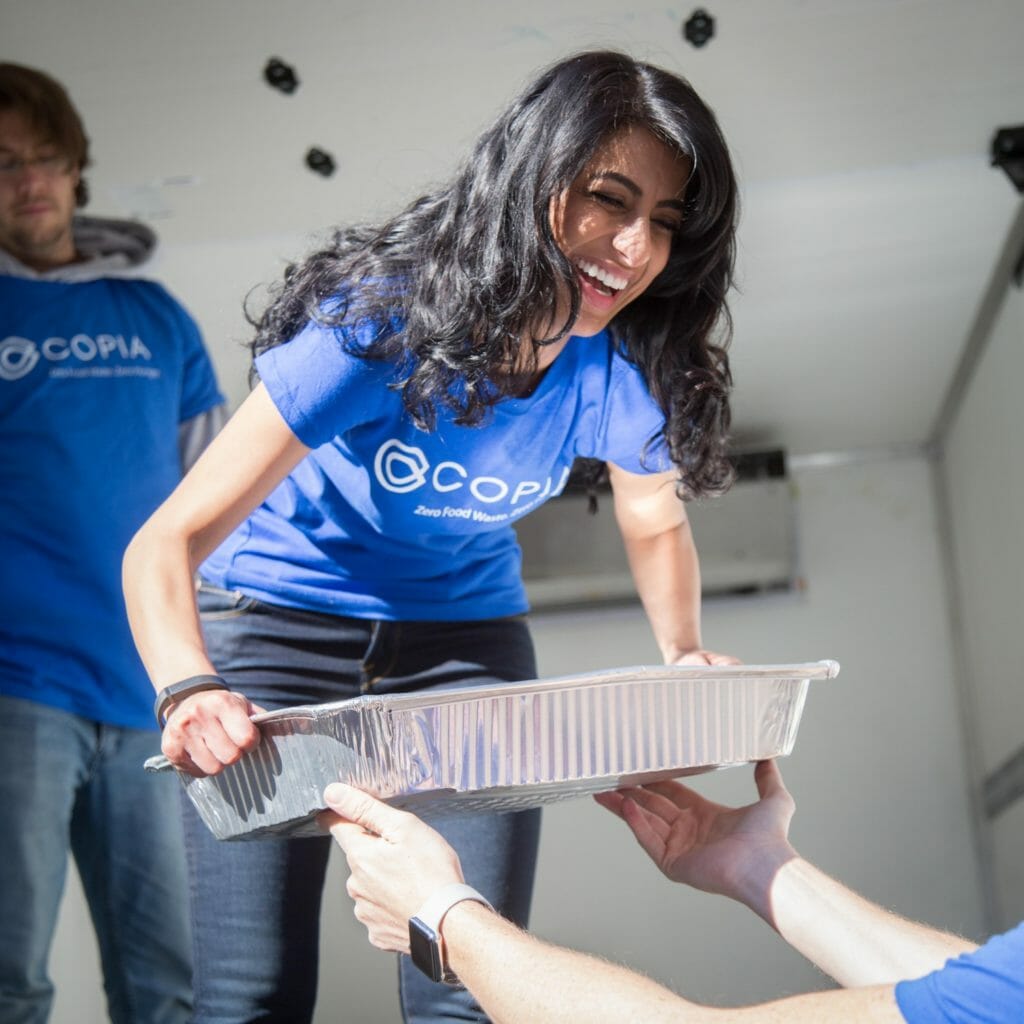 Of course, there is nothing stupid about hunger. According to Feeding America, there are approximately 50 million Americans living in “food insecure” households, including more than 15 million children. This is all while 365 million pounds of perfectly edible food are thrown away every day. But Ahmad, who has been focusing on streamlining ways to feed the hungry since she was a senior in college at the University of California, Berkeley, believes that for problems that feel so overwhelming as hunger and food waste, the answer is simpler than we realize. “There’s not a problem that is so grandiose in scale that has such an obvious solution as hunger does,” the 26-year-old tells Points of Light. “Eradicating hunger requires better distribution systems. This is what COPIA is creating. The world’s most effective and efficient global food redistribution system.”

Historically, charitable organizations have tried to meet the challenge of feeding America’s hungry, but falling donations and increasing need have made their success difficult. Moreover, these organizations have failed to realize that hunger in the United States occurs not due to a lack of food, but due to an inequitable distribution of it.

Against this backdrop, in 2013, Ahmad founded COPIA, a technology-based platform that connects businesses with excess food to people in need. Through this mobile and web app, businesses can request food pick-ups, and COPIA will dispatch a Food Hero (a trained driver) to pick it up and deliver it to the nearest shelter, after school program, or nonprofit in need.

So how does COPIA work exactly? “We’re Match.com meets Uber for food recovery,” Ahmad explains. First, use COPIA’s app or site to identify yourself as a food donor or food recipient. Non-profits looking for food donations can register directly on COPIA’s website. Once verified, they can place a request for what types of food they are looking for, when, and how much. COPIA food donors can be anyone — from restaurants, grocery stores, farms, and catering companies looking to get rid of surplus perishable items, to private events that over-ordered food.

If you are a donor, simply express how much surplus food you have, and request a pickup. COPIA’s algorithm will match the surplus food with recipients currently looking for food donations of that amount and type. Then, a certified driver from COPIA’s Food Hero team will pick up the food, and distribute it to where it’s most needed at the time. For instance, if a company has 2,000 pounds of food leftover after a conference, 500 pounds of that food might go to a veteran’s agency, while another 500 pounds might go to a women’s shelter — and so on, until the food has been entirely divvied up. It’s all about figuring out who has the capacity to accept what and when. “Whenever we have an incoming donation, we will match the amount and type of food to the non-profit that’s open and able to put that food to the best use for the most amount of people. We never let food go to waste.” Ahmad says. Not only is her system an efficient way to bring food to the hungry, it also saves businesses money by lowering disposal and overproduction costs and reduces methane by keeping food out of landfills.

If it seems simple, that’s because it is. Since its start, COPIA has recovered more than 800,000 pounds of food. This has provided COPIA’s food donors with over $4.6 million in savings and enabled COPIA to feed over 700,000 people — for reference, that is the equivalent of feeding the entire population of Luxembourg. During Super Bowl 50 alone, which took place in nearby Santa Clara, Ahmad and her team recovered 14 tons of high quality food — enough to fill four 16-foot-long refrigerated trucks to the brim, and feed 23,000 people at non-profits and shelters all over the San Francisco Bay Area.

Want to join COPIA in doing good, saving money, and feeding a lot of people? Sign up your company or event to join the movement by donating their excess food to COPIA. Find other ways to support COPIA on their website —- it is all of our responsibilities to help solve hunger: the world’s dumbest problem.