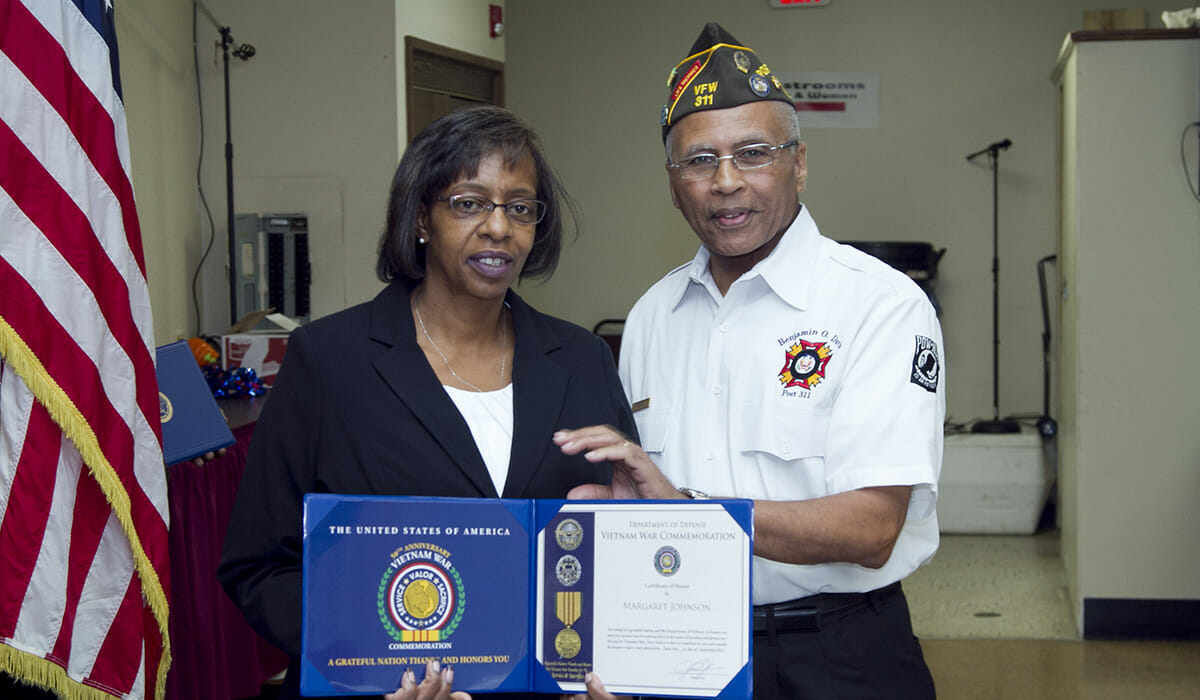 After working a full eight-hour day, Bill Browne can be found at the Benjamin O. Davis Veterans of Foreign Wars Post 311. As the current commander, he oversees the activities of his volunteer staff and enjoys spending quality time with fellow veterans. Being actively involved in his community is not new to Bill, whose humility and generous nature inspires those around him to bring service into every aspect of their own lives.

Bill served in the U.S. Air Force from 1967 to 1971. After decades of civilian life, he still felt a calling to serve others and was looking for ways to get involved. He researched several service organizations in his community, and joined the Veterans of Foreign Wars in 2011. The VFW is a nonprofit veteran’s service organization made up of veterans and military service members from active, guard and reserved forces. Bill’s Richton Park, Illinois, branch unites comrades to serve and advocate on behalf of veterans.

The Benjamin O. Davis VFW Post 311, named after U.S. Army General Benjamin O. Davis Sr., has become a second home to Bill. Initially, he attended weekly meetings and joined a small number of committees within the organization. In 2013, he was nominated to become a junior vice commander, and quickly rose to his current position of commander. His responsibilities include being responsible for coordinating activities of committee chairs, connecting volunteers to veterans seeking assistance, and running events. Under Bill’s leadership, VFW Post 311 has increased membership by 25 percent, making it the fastest growing VFW Post in the state of Illinois with 300 members.

Events at VFW Post 311 include an annual picnic for the people of Richton Park, which Bill describes as a big thank you to the community. He also leads the team’s planning of the Commanders’ Ball and Scholarship Dinner every August, where members give away six $1,000 scholarships to young adults on their way to college.

One of Bill’s biggest events of the year is VFW Post 311’s annual Stand Down, a day of giving where breakfast, lunch, toiletries and new clothing are provided to veterans in need. Hundreds of veterans from across the nation are invited to participate in Post 331’s event. Veterans and their families often arrive before the sun rises to line up to receive local social services. Agencies provide necessary referrals for housing, employment, physical and mental health screenings, and information on obtaining the DD Form 214, a certificate of release from active duty that is needed to receive social services.

“Being a veteran myself, it’s an appreciation day to show others that they are not forgotten,” said Bill.

One of Bill’s favorite memories while serving VFW Post 311 has been hosting a Christmas party for kids and their families with his fellow veterans. After months of gathering donated food and toys, the veterans dress up as Santa Claus and his helpers, and distribute gifts to local children.

Giving back to others is at the core of Bill’s nature, thanks to values instilled in him at an early age by his parents. He is always actively involved, but in humility, he is most focused on the joy of others.

“It’s really a team effort. We’re all out here for the same reason, trying to help veterans. We’re all moving forward,” he said.

Do you want to make a difference in your community like Bill? Find local volunteer opportunities.