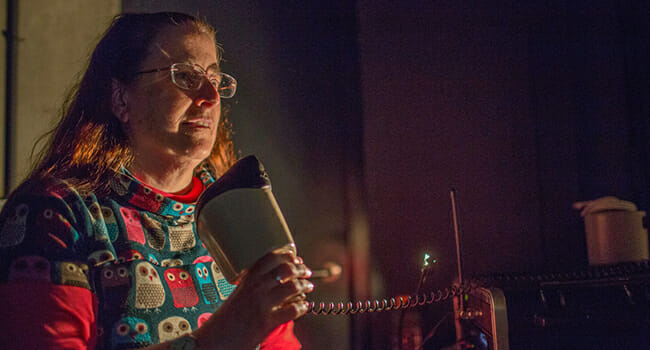 Rita, 59, of Washington, D.C., is a longtime volunteer at the Metropolitan Washington Ear, a nonprofit organization that provides free theater descriptions, newspaper readings and other audio services for the blind and visually impaired.

This is Rita’s 25th year volunteering with the Metropolitan Washington Ear, but her experience with describing started in her teenage years.

“My father was blind,” Rita said. “He became blind when I was 14 and so, just on my own, watching TV, I would describe what had just happened. He appreciated that.”

Just as her father appreciated her service, Rita knows that the blind patrons she now describes for also appreciate her service. Many people come to her after the show to thank her.

“I got a comment a number of times, that they appreciate knowing why the audience is laughing because it’s usually a visual thing and that really helps them,” Rita said.

Before describing a performance, Rita previews every show at least twice and takes notes of every action that needs to be described. Sighted people might not particularly think about how close the actors are to each other or how their bodies are positioned, but for the blind and visually impaired, every detail is important to understand what is going on in the scene.

Rita and the Metropolitan Washington Ear try to give the blind and visually impaired patrons as much of a similar experience as a sighted audience member would have. This includes having them make their own assumptions.

Rita has no plans of stopping and said that as long as the Metropolitan Washington Ear exists, she will keep volunteering.

“Being blind is hard enough,” Rita said. “So if you have anything that can help ease that and make any aspect of your life more accessible, I think that’s a good thing.”

If you are inspired by Rita’s story of service and would like to help people who are blind or have a disability, search All for Good for volunteer opportunities in your area.