The 2016 GE Global Month of Service connects employees worldwide around a commitment to serve, with thousands of GE employees volunteering their time and talent to build stronger communities where they live and work. This month of service, in partnership with Points of Light, demonstrates the power of individuals to create change in their communities. 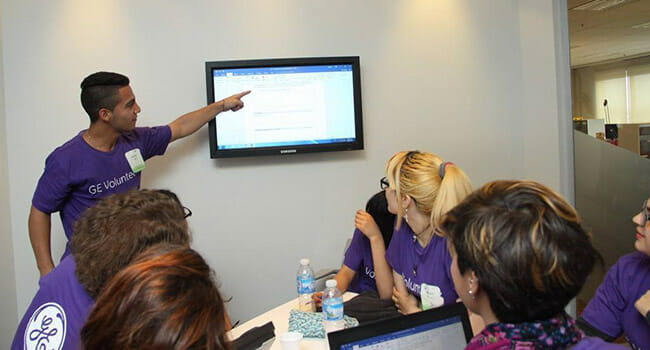 After several years of political and economic unrest, including a recession beginning in mid-2015 that pushed the unemployment rate to 9.3 percent, Argentina’s new president, Mauricio Macri recently declared the country “open for business” as part of a campaign to restore economic viability.

Entrepreneurship and innovation are key to being successful in the new Argentinian workplace. Low wages and a convenient time zone make Argentina an attractive international partner for businesses in the United States – in fact, Globant, an Argentinian software development firm, recently became the first Latin American company to go public on the NYSE.

As Argentina seeks to re-enter the global marketplace, GE volunteers are making sure that the next generation has the skills they need to contribute to this new growing economy.

In collaboration with Junior Achievement, GE hosted a Youth Innovation Camp at their Argentina headquarters in Buenos Aires that challenged 40 students from four local schools to find innovative solutions to problems faced by the modern city. 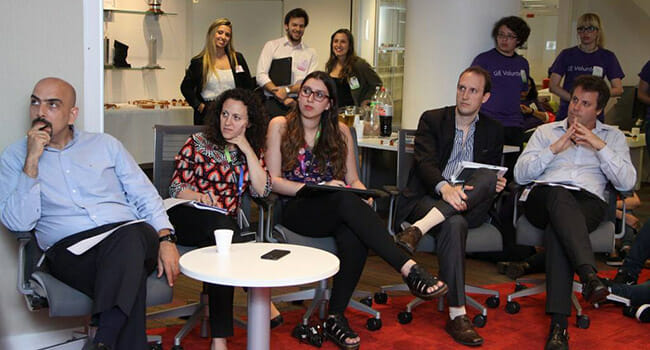 GE volunteers first gave the students, ages 16 to 18, examples of real-life solutions GE has developed in response to community issues in the areas of healthcare, energy and technology. The students were then broken into teams and, using GE innovation as a model, challenged to brainstorm ideas for smartphone applications that address challenges facing the city. Finally, the students presented their app solutions to a panel of GE employees.

The goal of this program is to help students “understand that they can promote an idea to solve problems in the city,” said Florencia Montoreros, manager of GE global parts and repair solutions for the Caribbean and Latin America, who helped organize the event. The students also gained valuable presentation experience as they explained their ideas to the panel, Florencia added.

Some ideas that the students came up with included an application called Basurin, which would alert citizens when their trash truck was arriving so that they could bring their trash directly to the truck and help cut down on the amount of litter in the city streets.

Another app, called Quisque, would help resolve parking problems in Buenos Aires by sending users real-time updates about parking availability on city streets and even allow users to pay through the app.

The winning proposal, an application called Techno Save, would send users a notification if they left a light on in their house and allow them to turn it off from the app’s interface.

By encouraging students to develop innovative solutions to everyday problems, GE is helping Argentinian youth build valuable research and critical problem-solving skills they can apply to future careers in business and technology. This will not only have a positive effect on the students’ lives but also on the ability of Brazilian communities to meet the needs of their citizens and compete in the global economy.