Encompassing the themes of movement making, women’s empowerment, and economic and social justice, the Service Unites Summit at the Conference on Volunteering and Service in Seattle featured individuals from across the globe – coming together around the shared belief that being in the service of others can change the world. Ken Workman, a descendant of Chief Seattle, welcomed attendees in Lushootseed, the Duwamish native language; Kayah George, a young Tulalip and Tsleil-Waututh scholar, activist and leader, opened the summit with the powerful message that it is compassion that makes one strong, and there is no limit to the extent of human kindness. 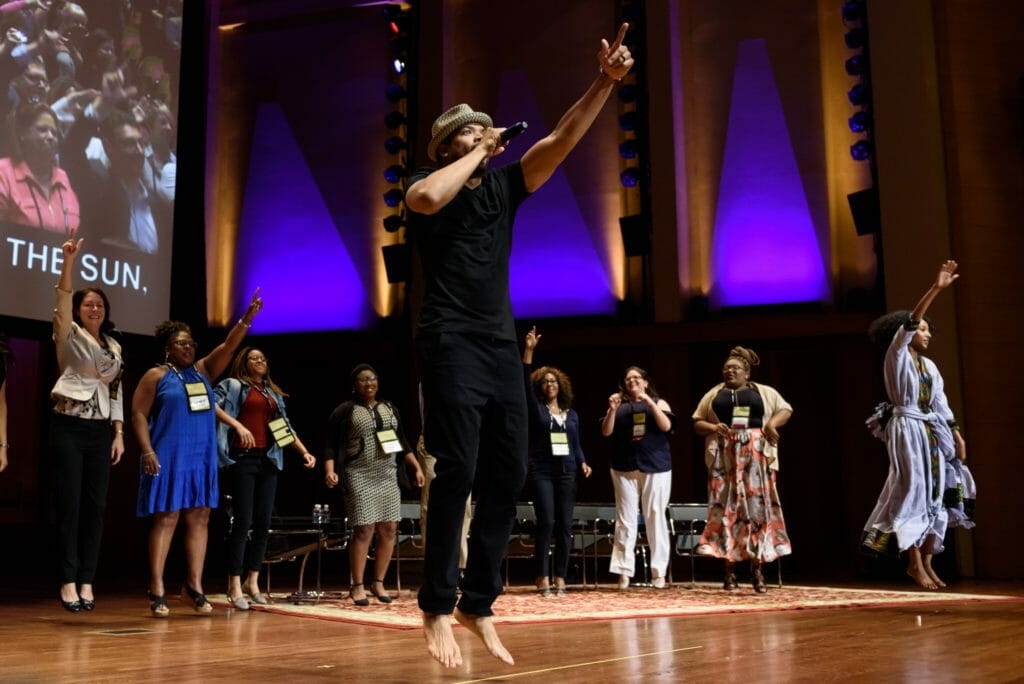 Turning a Moment into a Movement

“In this hall we have people that share the common belief that being in the service of others can have positive impact on the world we live in. The belief that being in the service of others is joyful. The belief that service unites,” said Kevin Johnson, CEO of Starbucks. Focusing on the three pillars of sustainability, opportunity and community, Johnson said Starbucks works to use its influence to make a difference in the world – committed to hiring veterans, military spouses, refugees and Opportunity Youth.

Points of Light chairman Neil Bush delivered an impassioned speech about the power of service to unite us in solving tough problems across the world, and the power of each individual to spark change. “The most effective change does not come from the top down,” Bush said. “It comes from the bottom up.”

“Voluntary service and liberty are two sides of the same coin,” he continued, noting that volunteerism is, in fact, the essence of our liberty and key to our national character in the United States. With the White House’s fiscal year 2018 budget calling for the elimination of the Corporation for National and Community Service, the federal agency that oversees AmeriCorps and Senior Corps, Bush called on the audience to join the movement to save these critical programs. Attendees had the opportunity to participate in a Thunderclap campaign in support of national service programs. Run in partnership between Points of Light and Voices for National Service, the Thunderclap drew support from 1,635 individuals and organizations across 555 cities that added their voices to take a #Stand4Service, calling for Congress to invest in – not eliminate – national service. Released at the end of the summit, the campaign had a social reach of 3.59 million.

Bush noted that national service programs are the foundation upon which thousands of organizations across the country build their volunteer programs. “Let me be clear,” he said. “We 100 percent support the Corporation for National and Community Service.”

Tracy Hoover, CEO of Points of Light, emphasized that while this year has been one of mounting tensions and deep frustration, the best reaction is to take action through service. “Progress has never been gained because of policy, but because of citizens,” Hoover said, encouraging each of us to unite as agents of change, working together for a common goal. Drawing on Dr. Martin Luther King Jr.’s idea that whatever affects one of us directly will affect all of us indirectly, Hoover stated that, “Our destinies are increasingly tied together.”

Acting as perfect examples for this individual commitment to change, Dr. M. Sanjayan, incoming CEO of Conservation International, and Ashton Cofer, a young inventor, sat down to tackle the issue of climate change. “The death of the planet has been foretold,” said Dr. Sanjayan. “The question remains, ‘What are we going to do about it?’” At only 15 years old, Cofer has already stepped up to answer that question – he invented a way to recycle Styrofoam by converting it into carbon that can be used to purify water, solving two global problems at once. We don’t all need to be inventors, he said, but we can start out with small ways to help that will add up. “If we can use science, use teamwork, we can solve any of these problems and really succeed in the future.”

Eric Liu, CEO of Citizens United, drew attention to another type of climate change. “We cannot deny that our civic climate is changing as well,” he said, and not for the better. The solution, he said, is national service. Liu said these programs bind us together with common purpose and aspiration and get people thinking about how they can be a part of something bigger than themselves. “I stand here today as a citizen, asking each of you to stand for national service,” Liu said, ending with a call for all of us to “exercise the full breadth of our citizen power.”

Umran Beba, CHRO, human capital management for PepsiCo, turned the conversation toward the empowerment of women and girls. “Girls have the power to the change the world,” she said. “We have the opportunity and responsibility to empower them.”

“Girls are strong, powerful, and bold. We have a voice, and we are changemakers,” said Zoe, calling on the older generations not to underestimate young girls. “We are small, but we are mighty!”

Strayed said we must work to change the cultural story of gender, and “challenge the stories that hold us back.” Hurwitz reminded the audience that women’s issues are human issues and that we must find the courage within ourselves to stand up. 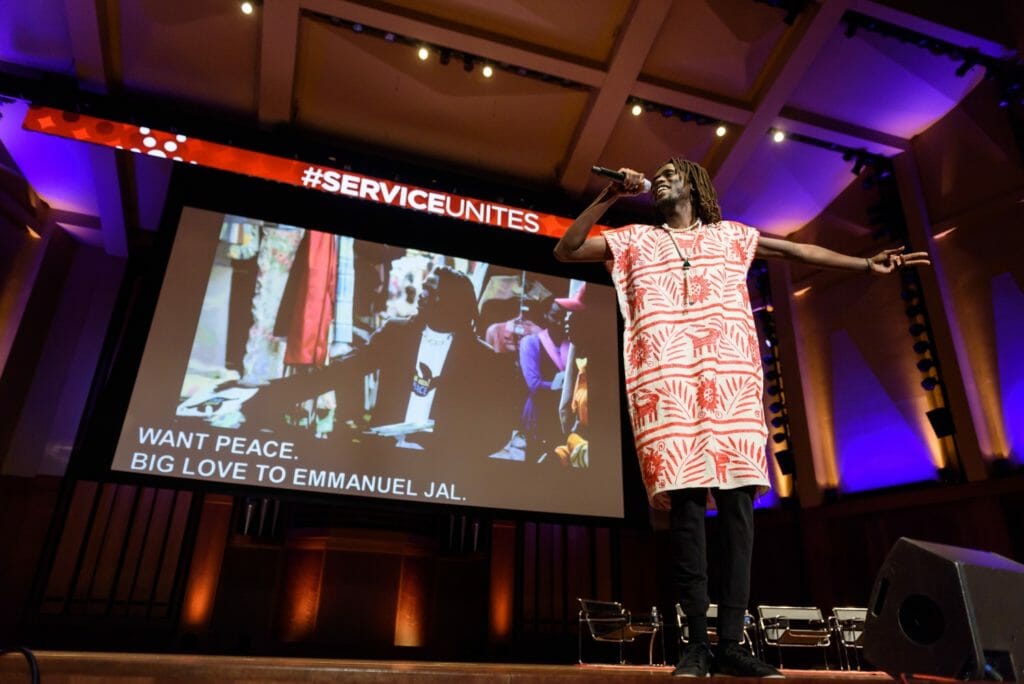 Kerry Sullivan, president of Bank of America Charitable Foundation, noted the importance of advancing economic mobility for individuals, families and communities. The company’s strategy is to put people at the center of change, giving them the tools and resources to build pathways to success.

“Everybody in this place is an angel doing something great,” said Emmanuel Jal, a former child soldier and refugee from Sudan, turned artist, activist, actor and author. In a rousing musical performance, Jal told the audience that every person has a story to share, and everyone is capable of doing something great. Sharing the story of his own journey, Jal said, “I stand here because some lady cared. I stand here because somebody dared.”

Elisa Hahn, a reporter with KING 5, led a panel featuring Carmen Best, deputy chief of the Seattle police department, prison reform activist Suellen Fried and Rev. Harriett G. Walden, founder of Mothers for Police Accountability. Focusing on issues related to the criminal justice system, the panelists emphasized volunteerism, education and investment in young people as the key solutions for overhauling the system and counteracting the social problems its flaws have created. And, working together. “If you’re not at the table, you’re on the menu,” said Deputy Chief Best. “We need to be all together at the table, having these conversations.”

The energy-filled and inspiring summit concluded with an address from pioneering astronaut Dr. Mae Jemison, the first woman of color to go into space. Dr. Jemison was also presented with the Daily Point of Light Award, in recognition of her work with youth, empowering a new generation to explore and connect with the world through STEM education. “I feel like all my work should be in the service of helping this world be a better place,” said Dr. Jemison. Quoting Alice Walker, Jemison noted, “‘it is the nature of the flower to bloom.”

“Our task is to ensure that we create the right conditions to allow all of us to bloom,” she said.

Get inspired! Watch more video from the Service Unites Summit.

A special thank you to UPS, Title Sponsor of the Conference on Volunteering and Service.