From aiding Haitian earthquake survivors to feeding the hungry in local communities to educating peers about environmental issues, young people across the country are helping shape their communities through service. Fifteen of these young heroes have been named to PARADE’s 2011 All-America High School Service Team, selected in partnership with Points of Light Institute’s generationOn.

For the second year, PARADE Magazine is lifting up the stories of inspiring high school students who are changing the world. The PARADE All-America High School Service Team showcases the entrepreneurial spirit of these young people and shows how individuals – regardless of age, resources or experience – can create real change. You can read more about these young people and their impact in this Sunday’s PARADE Magazine that will reach 47 million people.

On Aug. 9 in Washington, D.C., these extraordinary young people were honored in special ceremony hosted by PARADE and generationOn, the youth service division of Points of Light Institute. Each honoree had the opportunity to tell the story of how they are marking their mark on the world and each energized those in attendance with their enthusiasm, passion and drive. 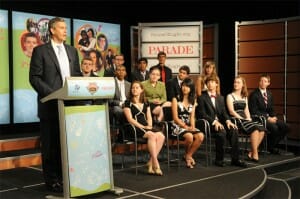 During the ceremony, U.S. Secretary of Education Arne Duncan encapsulated the honorees’ impact, saying, “By helping solve problems and meet needs in communities near and far, these students enrich their own lives, strengthen our country and improve conditions all over the world.”

The students were nominated in five categories: community, economics, education, environment and health. All the winners will be showcased on www.parade.com. 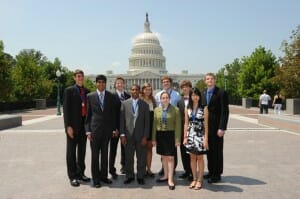 The awards ceremony was followed by a forward-looking discussion with the PARADE All-America High School Service Team about the critical role of youth service as a force for changing the world. The discussion, facilitated by Juan Williams of Fox News, proposed ideas to inform a set of policies and priorities to support service in schools and empower youth as change agents.

These young people remind us of the power of idealism, passion and seeing the possibilities before us rather than just the obstacles.

When adults told Mary Grace Reeves, 16, of Pensacola, Fla., there were no resource, no money and nobody to create reading programs for young girls in the Gulf Coast, she responded simply, “I will do it.” And she did. She started American Girl book clubs that have touched 900 girls. She and the other 14 award winners remind us that we all can answer challenges of our day – we simply have to respond “Yes, I will do it.”