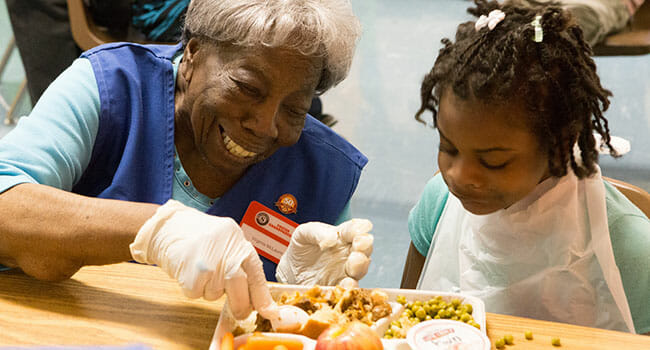 Photo Credit: Corporation for National and Community Service
Senior Corps Foster Grandparent Virginia McLaurin volunteers at a school in Washington, D.C. She was awarded the President’s Lifetime Achievement Award in recognition of her nearly two decades of service.

With spring quickly approaching, so is the season for giving back to volunteers who dedicate their time to serving others. National Volunteer Week kicks off on April 23 – an opportunity to recognize and thank volunteers who lend their time, talent, voice and support to causes they care about in their community and around the world. What better way to acknowledge a volunteer than by giving them the opportunity to have presidential recognition?

The President’s Volunteer Service Award  recognizes the importance of volunteers to America’s strength and national identity, and honors the positive impact of their service on communities across the country.

The PVSA is awarded based on the number of hours volunteers have served during a 12-month period, or over the course of a lifetime. The awards are offered in various levels to recognize different milestones of service achievement. Levels include bronze, silver, gold, and the highest honor, the President’s Lifetime Achievement Award, for those who have contributed more than 4,000 hours of service in their lifetime.

Each honoree receives an award package, which can be customized to include the official PVSA pin, coin, or medallion, a personalized certificate of achievement and a congratulatory letter signed by the President of the United States.

Established in 2003, PVSA is an initiative of the Corporation for National and Community Service, and is administered by Points of Light. Awards are issued by Certifying Organizations and Leadership Organizations, which help uphold the program’s integrity, and assist in identifying and recognizing Americans making a difference through volunteer service.

Order by April 5, 2017, to receive President’s Volunteer Service Awards for your volunteers in time for National Volunteer Week!