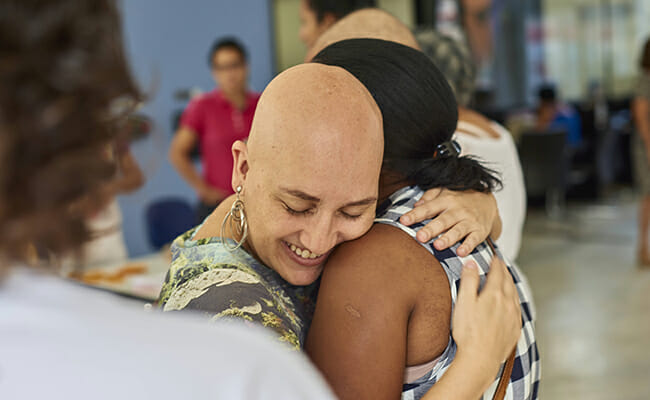 Photo courtesy of Atados, a Points of Light Network affiliate.

At the core of Points of Light’s philosophy is a belief that the most powerful force in the world is the individual who has realized their power to do good.

Whether you plug in or tune out, it is hard to avoid the topic of bitterness and division. It is in the headlines, on the nightly news, in our social media feeds and at our family gatherings. Everywhere we look, differences – political, racial, geographical, and otherwise – threaten to divide us. Amidst deep political divisions, heartbreaking displays of hate and intolerance, and a growing distrust of people and institutions, it is critical that we leverage every available opportunity to lift each other up and inspire one another to move beyond this destructive force field.

Instead, consider another power. The incredible power of people – as a force of human kindness.

At the core of our philosophy at Points of Light is a belief that the most powerful force in the world is the individual who has realized their power to do good, and who applies their time, talent, and resources to make a positive difference. I believe that every individual has the power to create change and no act is too small. It is not someone else – it is each of us.

Last month, the world paused to celebrate the life and legacy of our founder and 41st President of the United States, George H.W. Bush. In the many tributes spoken and written about his life, the primary focus was not on his many professional accomplishments, but on his character and the personal traits that most who knew him experienced and remembered. His friends reminded us of his empathy, respect, desire for people to be kind to one another, and his belief in the power of the human spirit to create positive change. Nearly every friend and leader who spoke about him expressed President Bush’s reference of “a thousand points of light.” It was clear in their reference, and in the president’s own words, that he used this phrase as metaphor to illustrate the multiplying effect of people doing good. 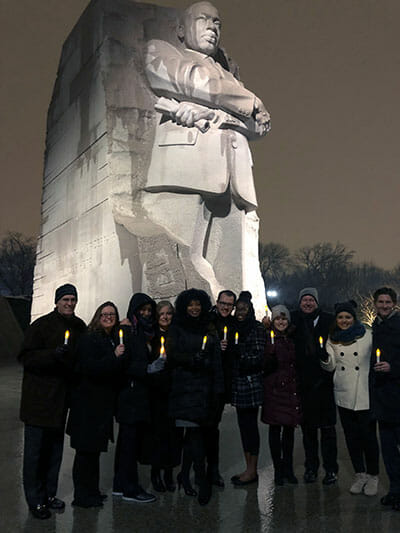 Last week, I had the pleasure of spending a couple of days in Washington, D.C., with nearly 100 corporate partners focused on integrating social purpose into their business strategy, as we came together for the annual meeting of our Corporate Service Council. After a day of connections and exchange, on the first night, a small group took a walking tour of the monuments and paused at the Martin Luther King Jr. Memorial for a special moment of reflection. Each person received a small book of “Quotations of Martin Luther King Jr.” and took turns reading their favorites aloud.

It was inspiring that so many of our partners extended their day to participate in this moment, despite the snow on a cold January night. Experiencing the monument together provided a brief moment of wholeness and hope. Now, each person has the opportunity to share and discuss that experience with others, whether in their homes, office, and communities around the country, and become multipliers, extending wholeness and hope.

President Bush asked each of us to become a point of light. Dr. King challenged each of us to take an active role in building a better world. Both leaders encouraged us to serve others and live a civic life. Each year on MLK Day of Service, we have the unique opportunity to reflect on the gains we have made, and re-commit ourselves to the work that remains as we strive for a more just society. What is interesting is that our expression of civic life today is complex and evolving. Individuals are leading and lending support to causes they care about through many mechanisms.

Today’s engaged person may express their desire to do good through their purchase decisions, in what they share on social media, or where and how they choose to work, and what non-profit organization to support as a volunteer or donor. Whether online, at the office, or the local food bank, whether with a vote, a voice, or a wallet – doing good comes in many forms. People are still working to achieve many of the same ideals Dr. King fought for in his lifetime. Peace, justice, equality, kindness – and the creation of a “Beloved Community,” a global society built on love for all people. 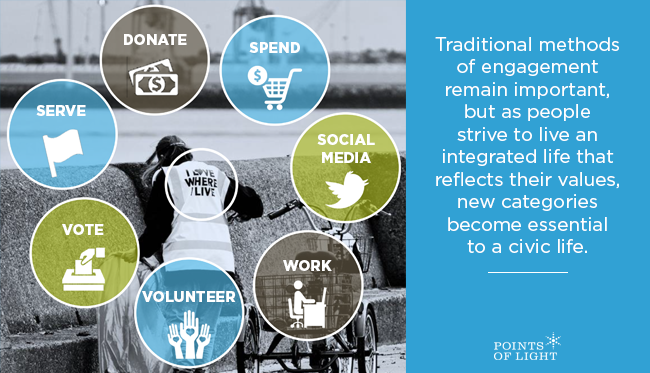 We are witnessing a significant shift in our civic culture, a revolution against apathy, marked by events and movements that have altered the way we connect with and engage in our communities and our world. If we look at eras of significant change throughout history, each was preceded by a period of disruption. The Industrial Revolution was the transition from hand tools to machine-powered manufacturing, and ushered in the Industrial Age. The Digital Revolution propelled us from analog to digital technology and electronics, and led us into the Information Age.

Where the Industrial Age centered on the rise of the factory system, I believe this new age is an era of civic engagement that is driven by human capital, connections through technology, a force of human kindness, and the extraordinary power of people to create change. When future generations look back on this time, they will see it was an era of sustained, meaningful civic engagement, fueled by a global community of people ready and willing to do good. The dawn of a “Civic Century.”

Each year we experience an astounding pace of advancement in science and technology, pushing humanity to new limits. While we can be certain that technology will continue to change, let’s also know that certain truths remain constant. As Dr. King taught us:

Instead of sipping on stories of bitterness and division, I suggest a new fuel for the new year. Imagine kindness. The super power of people – the multiplying effect of a force of human kindness in the world.