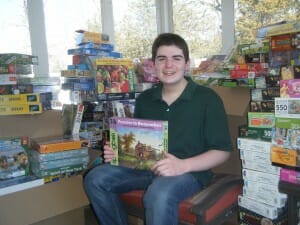 I have sometimes been asked when the moment first happened that I realized I couldn’t just stand by and watch the needs of others go unmet. For me, this moment came when I was very young. At 5 years old, I was named a Davidson Young Scholar and invited to a conference in Nevada. At that point, being a Davidson Young Scholar meant, to me, only that I was smart, but I had pretty much figured that out on my own during the parent/teacher conference that ensued when I got into big trouble in nursery school for reading my classmates’ confidential records (out loud when the teacher was out of the room).  I didn’t realize that in only a few months, in Nevada, I would have an experience that would help me define who I am.

That summer, I traveled to Nevada with my parents, where I met about 20 other Davidson Young Scholars, as well as Jan Davidson, the founder of the organization. Jan and her husband, Bob, had become very wealthy as the developers of a children’s educational software company, and they had decided to invest their money into an organization to support the needs of gifted students. I attended a presentation given by Jan, where she said that the reason they were investing in these students is that they felt that, if these students were encouraged, they would be the ones most capable of contributing positively to society.

To this day, I remember Jan saying she believes that “anyone who has the ability to help another person, has the responsibility to help them.” Interestingly, no one else remembers Jan saying exactly those words, not my parents, not my Davidson counselor, not anyone that was there. Apparently, that’s just the way my 5-year-old mind understood what Jan was saying. Nevertheless, it was at that moment I understood that it was my responsibility to do whatever I could to help others and make the world a better place.

Ever since then, I have made it a point of being observant of those around me and “filing away” in my mind whenever I notice a need being unmet. When I was 6, I noticed my great-grandmother was having trouble getting into our minivan, so I built her a special step, The Great Granny Booster Step, with a handle attached. The next year, the special step won a prize and I was invited to Chicago. While there, I saw many homeless people living in the underground highway system under the Million Dollar Mile shopping district. At my acceptance speech, I remember saying that it was my responsibility to do something to help these homeless people. Five years, I later I invented the Home Dome, a shelter for homeless people and victims of disaster, that won first prize in the Intel/BKFK Trash to Treasure contest.

Many similar scenarios have been repeated, continuing to my current project, PuzzlesToRemember, which distributes puzzles to more than 700 facilitates that care for Alzheimer patients across North America in an effort to ameliorate the affects of memory loss, and my work as an Alzheimer’s Research Intern, but it all boils down to a few elements. First, I realized at age 5 that everyone has the responsibility to do what he/she can to help others. Next, that to identify a need, one has to be observant. Third, that microphilanthropy, doing just some little thing that helps, is a very powerful force. If everyone would do just some little thing that they recognize as helpful to others, the world would be a much better place.