Meet Sherman Williams, a volunteer at HandsOn Broward – part of Points of Light’s HandsOn Network of 250 volunteer centers. Williams is using his expertise in business to help people from low- and moderate-income households achieve financial stability. 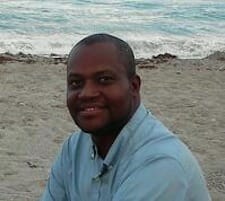 As a teenager, Sherman Williams experienced the powerful difference one person could make in someone’s life. A native Trinidadian, he had moved to the United Sates when he was 5.

“Early on, the motivation to adapt to the American culture was a priority,” Williams says.

But adapting was difficult. Teased for his accent, he became a quiet boy who noticed everything but said little. That changed in the eighth grade, when Williams wrote an essay about homelessness and the environment.

“Back home [in Trinidad], homeless people were everywhere,” Williams says. “Then I saw them in the United States and I made the connection that homelessness was a serious issue.”

Williams’ heartfelt writing won him first place in the contest and earned him a spot in the oratory contest that followed. Having never given a speech, and self-conscious of his accent, Williams was dismayed. But a dedicated teacher stepped in to help. She coached him daily, working with him on projecting his voice and slowing down his speech.

“I took her teaching to heart,” Williams says.

Under the teacher’s guidance, Williams practiced diligently and won third place in the districtwide competition. “That was a life-changing experience for me,” he says. “The event gave me the confidence to be whoever I wanted to become. It was an empowering moment in my life.”

Williams wanted to help others feel that same empowerment. Inspired in part by Dr. Martin Luther King, Jr. and the power of one, he began to volunteer here and there. President Obama’s call to service, however, was the final impetus Williams needed to become a committed volunteer. In 2011, he signed up with HandsOn Broward and has been actively engaged ever since.

When Williams learned about the Financial Opportunity Corps – a partnership between Points of Light, Bank of America and the Corporation for National and Community Service – he quickly signed up for the first volunteer orientation and training. The program recruits and trains volunteers as financial coaches who help people from low- and moderate-income households get their finances on track.

Williams, who holds a bachelor’s degree in business management and an MBA, felt he could use his business background and speaking skills to benefit the program, run locally by HandsOn Broward.

“I chose (the Financial Opportunity Corps) because the information it offers is basic but is widely overlooked,” Williams says. “It can make positive impact in communities. … On my path, it took only one person to bring change, the proverbial power of one. Now I can empower others to make positive financial decisions.”