Gianna is advancing social causes in education and in business. She is co-founder of Hands On Manila Foundation, Inc., a volunteer organization of choice for community-driven programs and innovative solutions to developmental challenges in the Philippines founded in 2001. As the first chairperson and president of the first international affiliate of the Points of Light, she helped grow and steer Hands On Manila for the last 21 years in various capacities and continues to do so. Gianna received the Aguhon Award in 2017 for leading the most successful corporate volunteer effort in the Philippines. The award honors Asians who have made an economic, cultural or social impact in the region. She earned her Bachelor of Laws degree from the Ateneo de Manila School of Law and obtained her Masters Degree in Public Administration from the John F. Kennedy School of Government at Harvard University. She practiced law from 1985 to 1992 as an associate lawyer at the Quisumbing Torres & Evangelista law firm, an affiliate of Baker and McKenzie, USA. In 1994, she was appointed Philippine Honorary Consul to the Republic of Peru for 3 years. She is currently the senior vice president for Corporate Affairs at Far Eastern University, one of the leading universities in the Philippines. 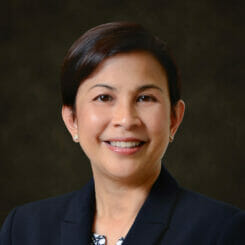