Meet Daily Point of Light Award honoree Adam Hoffman. Read his story and nominate an outstanding volunteer or organization as a Point of Light. 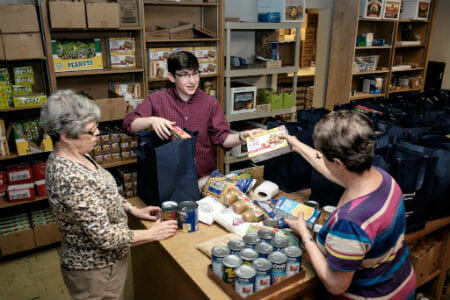 When Adam Hoffman was growing up, his grandmother, Anna Rosenthal – a Holocaust survivor who was imprisoned at Auschwitz and two other Nazi camps – told him stories of hunger and helping others.

During her imprisonment, Rosenthal, who is now 89, would sneak out at night to retrieve potato peels from the garbage. Though she herself was hungry, she would give the thrown-out food to the sick in the infirmary.

Adam, who lives in Houston, says his grandmother’s stories have helped shape him. He began volunteering at a local food bank and was concerned that much available food offered to banks and pantries by area grocers eventually expired because the food banks did not have enough personnel to make regular pick-ups. 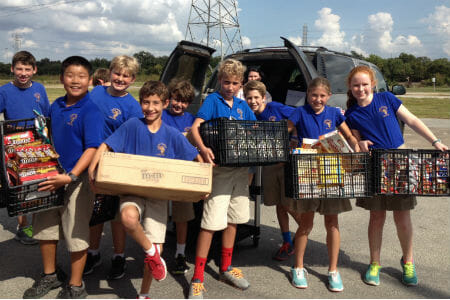 In 2013, when he was just 13, Adam founded Food4them, a charitable organization dedicated to collecting as much available food from local grocers as possible and to deliver it not only to Houston food banks and pantries, but also to pantries in rural towns where poverty rates are high.

Adam approached grocery corporations directly and offered to pick up donated food every two weeks so that it would not sit until it expired on loading docks. Today, Adam has negotiated pledges with several local grocery chains that enable Food4them to deliver more than 700 pounds of food each month to pantries in Houston and nearby towns.

“If my grandmother was able to do good deeds and give people food under the most horrible circumstances, I don’t just feel a responsibility but an obligation to do it when I’m an American living in good times,” Adam says.

Impressed by Adam’s resourcefulness, the Houston Food Bank joined local corporations as a Food4them partner, helping Adam “learn the trade,” but now he has his own sources and suppliers. Adam has five core volunteers who collect and deliver food.

“Two things set us apart from other local food charities,” says Adam. “First, we pick up more regularly from grocers so that food doesn’t expire and go to waste. Second, we make deliveries to small towns not served by Houston-area banks and pantries.”

Adam, now 15 and a high school sophomore, has enlisted help from his classmates.

“What has impressed me most since we started Food4them is how great a difference one person can make, whether it’s me or someone else who has volunteered,” Adam says. “One kid who helped us told me it was an extraordinarily inspiring moment and that he wanted to do more of it. Some kids have gone on to volunteer independently for food banks. It’s an incredible experience, and I think that if everyone took a few hours out of their week to volunteer, together we could make an amazing difference.”