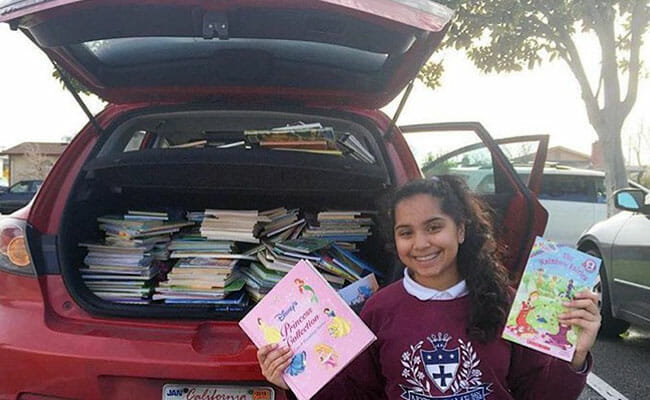 “The single biggest indicator for academic success is having books at home,” said Fatima Yousef, the 16-year-old founder of the nonprofit Stories for a Future.

While it’s a statistic she knows by heart, she also knows that having books may not be a reality for many low-income youth. At a young age, she recognized the wide educational disparity in the San Francisco Bay Area, where she lives.

“The Bay Area is small,” said Fatima. “You know how all the kids live. Kids in my school had torn backpacks, the quality of our schools was way below those on the other side of the bay.”

Fatima, then just 14 years old, decided to take matters into her own hands to advance literacy of underprivileged children in the community. She recruited friends to help her hold a book drive in the middle school and distribute them to younger children. 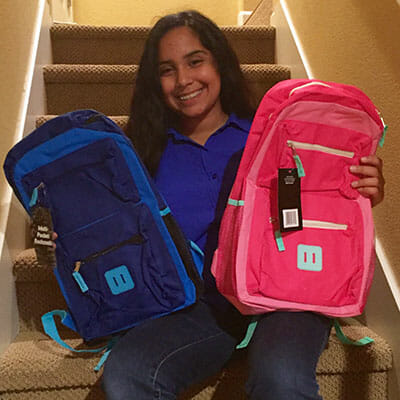 Two years later, she has grown her book drive initiative into a nonprofit with multiple literacy and education programs, including summer literacy programs serving more than 75 children at two local libraries. She also started a new program called Little Library, in which she fills a shelf with books at foster care centers.

“Literacy is so important in raising your socioeconomic status,” said Fatima. “When I was younger, my mom brought me to volunteer with an organization called Give Light, which helped orphans. It was heartbreaking to see some of the conditions they lived in. I wanted to give them a book and change their lives.”

Fatima credits her mom for inspiring her to get involved as a child. They would work with orphans and foster kids, support fundraising efforts and participate in service through her Girl Scout troop.

“My mom has always encouraged me to give back” said Fatima. “I think when I told her I wanted to start my own nonprofit she was a bit dubious, but when she saw how committed I was she was really supportive.”

Her next big project is called Backpacks for a Future, which aims to provide low-income minority children with backpacks and school supplies before the school year starts. She applied for a grant and received $1,000 to buy backpacks and program supplies, which she distributed to 100 students.

“Some kids don’t even have pencils to do homework assignments,” Fatima said. “I want to make this an annual program so kids can start their school year with confidence.”

As she looks toward the future, Fatima hopes to get involved in legal work around education policy, and continue inspiring others.

“If you find something you’re really passionate about and you make the time to do it, it’s so rewarding,” she said. “I think that every kid should do it. Just go for it.”