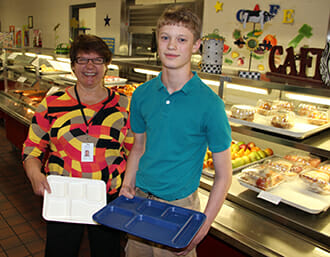 Ben Gray’s actions sparked his entire school district to eliminate the use of non-biodegradable polystyrene lunch trays. This past Earth Day, April 22, the entire Franklin Special School District in Franklin, Tennessee switched to reusable and biodegradable trays only.

Day after day during lunch, Gray, an eighth-grade student at Freedom Middle School in Franklin, noticed kids in his school throwing away the polystyrene cafeteria trays. Chloe, his fourth- grade sister, confirmed his suspicion that the same thing was happening at her elementary school and most likely at the other seven schools in the district.

As it turns out, Gray learned the school district’s cafeterias had used and disposed of roughly 220,000 trays this school year alone. The use of these trays just seemed wrong to him in an age of heightened environmental consciousness, so he decided to do something about it.

Gray felt that the use of the polystyrene trays conflicted with the other green initiatives sponsored by the school district and city. That was enough to spur Gray on his quest to find and implement an alternative way to serve school lunches. As a result, the school district began phasing out its current supply of polystyrene trays in favor of the washable and biodegradable trays. Moreover, on Earth Day, April 22, 2014, all of the school district’s meals were served on recyclable or compostable lunch trays, providing thousands of students with the same message taught in their classroom: reduce and recycle.