On November 13, 2008, Jamie Schanbaum, then 20 years old and enjoying the life of a typical college student, was feeling ill. Her symptoms were similar to those of the common flu but within hours she was admitted to a hospital in Austin, TX. Two days later, doctors explained that her lack of feeling in her extremities and discolored limbs were the result of meningococcal disease, a rare but serious disease. Up to 1 in 10 people die from meningitis in 24 hours. Up to 1 in 5  will survive but with lifelong consequences; in Jamie’s case, all her fingers and both legs below the knee had to be amputated. 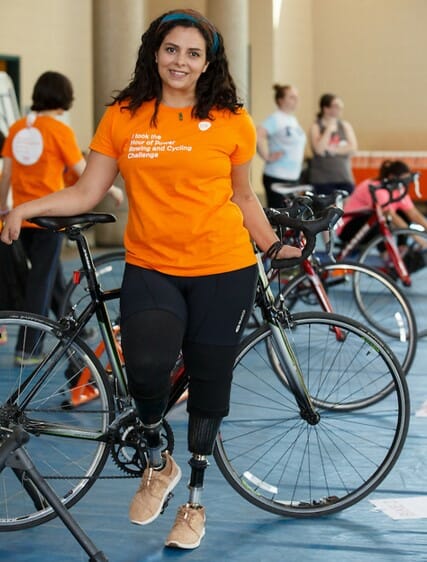 Schanbaum participated in a cycling and rowing challenge in Philadelphia on World Meningitis Day.

During Jamie’s seven-month recovery in the hospital, she went from wondering “why me?” to wondering “why anybody?”  She has made it her life’s work to spread the word about meningitis and educate young adults and parents about the disease. Jamie’s passion for sports and determination to go on after meningitis, led her to become a paralympian cyclist.  Jamie won a gold medal in the 2011 US Paralympic cycling games.

Jamie started The J.A.M.I.E. Group to advocate for meningitis awareness in her home state of Texas and around the country.  In the summer of 2009, The Texas Legislature passed Texas Senate Bill 819, or The Jamie Schanbaum Act, requiring meningococcal (A, C, W, Y) vaccination of in-state college students, the despite two previous unsuccessful attempts.  Now more than 350,000 students in Texas each year are receiving the vaccine against serogroups A, C, W and Y. Since late 2014, vaccines have become available to protect against serogroup B.

Jamie is now working to raise awareness of the two vaccines that together protect against the five most common serogroups of meningitis. In 2016 she started working as a GSK spokesperson to educate parents and young adults about the risks of meningitis and she is traveling around the country talking to media, students and parents about meningitis.

According to a recent poll, less than half of young adults (49%) know that meningitis can lead to serious health complications and 88% of parents who vaccinated their children against meningitis don’t know which serogroups of bacteria their child is vaccinated against. Jamie’s message is simple: Please get educated. Young adults need to speak to their parents and doctors.