As a black woman studying electrical engineering and computer science at Vanderbilt University in the late 1980s, Kimberly Bryant saw she was in a distinct minority among her classmates. Twenty years later, when she decided to start her own mobile health technology company in the San Francisco Bay area, she discovered there was still a strong culture and gender divide among the area’s technology professionals. 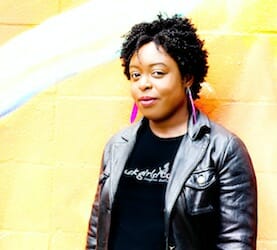 “I was networking in order to start my business and I saw a huge diversity problem,” says Bryant. “Women of color were seriously underrepresented in the field.”

Bryant had been a regular community volunteer throughout her long career in manufacturing design and IT management. She put plans for her health technology company on hold and instead turned her attention to helping close the digital divide for women of color.

In 2011, she founded BlackGirlsCode, a nonprofit organization that introduces girls of color to in-demand skills in computer programming and technology. The girls range from age 7 to 17, a time when they may be considering what careers to pursue. Since holding its first Bay Area pilot program in October 2011, BlackGirlsCode has taught workshops in robotics and the development of webpages, mobile applications and games to more than 2,000 students in 10 U.S. cities and internationally. In Johannesburg, South Africa, the organization has held three workshops in partnership with the international software company ThoughtWorks.

“It was a personal passion for me,” says Bryant. “There are cultural, economic and gender barriers that are keeping girls of color from heading where tomorrow’s jobs will be. … My own daughter was 12 when I started BlackGirlsCode. I want her, and all the girls we teach, to be able to pursue good jobs at good companies. We’re working to create a place for them.”

BlackGirlsCode offers one-day workshops, one-week summer camps and six-week workshops held on consecutive Saturdays. Because students come from diverse economic backgrounds, some pay their own tuition, but 80 to 90 percent receive full or partial scholarships from partner corporations such as Google, Microsoft, Twitter and Kapor. BlackGirlsCode has conducted follow-up surveys of its workshop participants over the first three years, and a large number report they are taking additional steps to further their education in technology.

Bryant says that while schools in San Francisco helped to promote the organization’s workshops, the rapid growth of BlackGirlsCode was mostly sparked by promotional efforts and word of mouth.

“The growth has been amazing,” says Bryant. “We’re all volunteers except for one paid staff member. Right now, we have 1,000 volunteers in our database, and we’ve only worked with about half of them, mostly because the others are in cities we haven’t reached yet.”