Meet Daily Point of Light Award honorees Jacob and Dani Brier. Read their story and nominate an outstanding volunteer you know as a Point of Light. 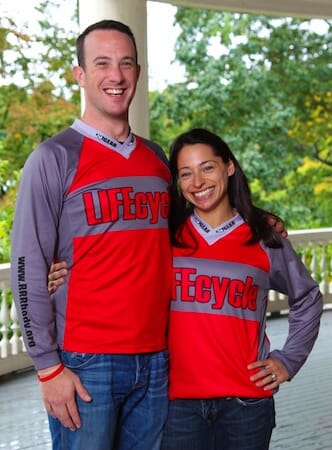 Participating in their first bike-a-thon eight years ago was a demanding effort that required Jacob Brier and his wife, Dani, to raise $4,000 each and complete a punishing two-day, 200-mile ride in and around Boston.

It wasn't particularly fun, but the cause – cancer research and treatment – was important to them because both had close relatives who had battled the disease.

"We realized that this kind of support was needed closer to our home in Rhode Island,” says Jacob, “but we couldn't find a local bike-a-thon that funded cancer research and treatment.”

"We quickly learned that organizing and managing a bike-a-thon is even harder than riding in one," Jacob says with a laugh. He and his wife had no mechanism for raising money and no idea of how to persuade strangers to trust them. They had no experience in designing a route or coordinating with municipalities.

Gradually, things gelled. "We designed webpages for each rider that included the story of why they were participating and provided a way for donations to be collected," says Jacob. "We tested each route to take into account traffic conditions or construction. We built relationships with local police."

The first Ride 'Round Rhody attracted 49 cyclists who raised $10,000. These days, about double that number of cyclists raise about $70,000 each year. By the ride's 10th anniversary, the Briers hope to have raised $1 million for area hospitals and programs.

The money is distributed via grants by the Briers’ nonprofit, Lifecycle Inc., which in addition to the bike-a-thon occasionally organizes other fundraisers, such as benefit concerts and award dinners.

"There are a few programs we automatically donate to every year," says Brier. "Then, as the money comes in for each race, we contact the cancer centers to ask about their specific needs. If an oncologist has an idea for improving treatment or needs a piece of equipment, our board of directors will evaluate it to see if it's in line with our funding interests."

In 2012 and 2013, for instance, Lifecycle helped fund clinical trials for a pancreatic cancer treatment. Last year, one of the volunteers distributing jerseys to the cyclers was someone who had chosen to participate in the trial.

"He is now in complete remission," says Brier. "He was there to celebrate his life – and to help others enjoy that success."