Maryam Farooq was never bullied at school, but she saw classmates endure teasing and insults. She lamented the crushing effect bullying had on her friends.

So Maryam, of Queens, N.Y., decided to act. In 2011, as an eighth grader, she founded a school chapter of No Place for Hate, a program sponsored by the Anti-Defamation League that aims to fight bullying and create safer learning environments by promoting unity and respect. 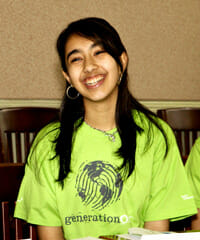 This year, when Maryam entered high school, she founded a chapter at her new school.She successfully secured a grant from the ADL to train 20 students as peer trainers. She has also traveled to several other schools to speak about the dangers of bullying and host anti-bias workshops.

“Some people don’t understand there are extreme consequences to school bullying,” says Farooq. “I observed it for years in school. And then friends who were victims of bullying began to tell me how depressed the experience of being bullied made them. They felt so low about themselves that they wished they could stay home rather than face more of it. Now, think about the fact that suicide is the third highest cause of death among youth. There are many reasons for that, but an unsafe school environment is one that we can and must address.”

Maryam says No Place for Hate appealed to her because, while it provides literature and guidance, the program lets students decide how to deal with bullying at their schools.

“Our No Place for Hate committees are free to brainstorm,” she says. “In middle school, we held No Place for Hate awareness days. … We held an all-school assembly hosted completely by students. And we persuaded teachers of art, English, history and math, to integrate discussing the problem of bullying into their class lessons for an entire week.”

At Maryam’s new high school, the No Place for Hate committee is just getting organized, but it has already held after-school “Snack and Chat” events to talk about bullying and let students know there is help.