Children bullying is a real issue that plagues many students all across the country. Though one may not see it or be subjected to it themselves, doesn't mean it does not exist. While there are those people who choose to ignore bullying, or blame it on just childish behavior, Morgan Guess chose to tackle the issue head on. 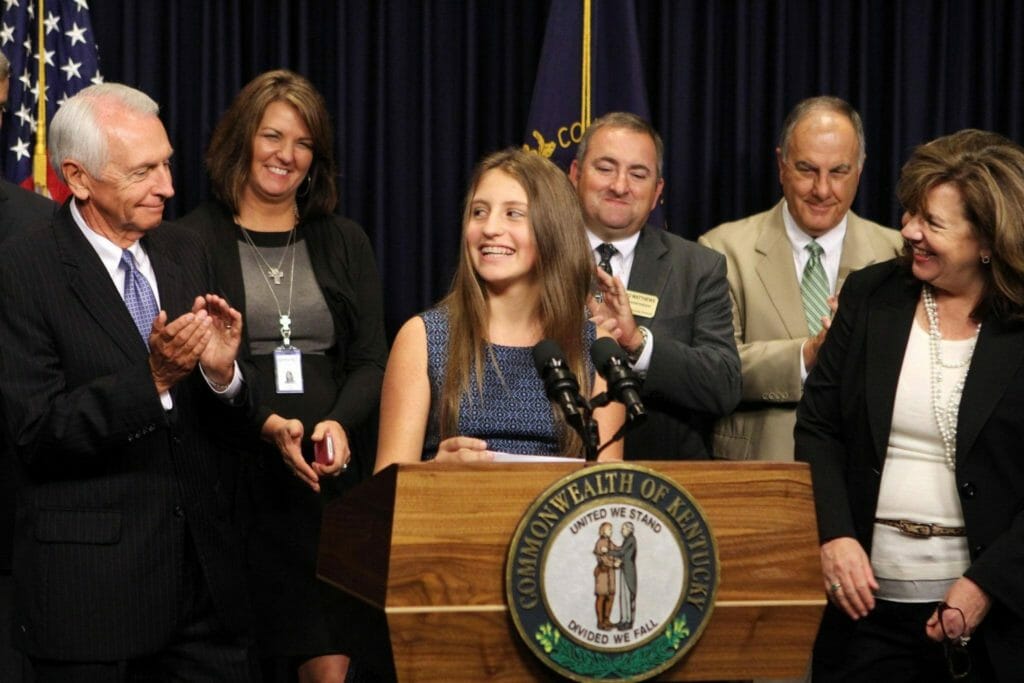 Morgan, center, speaking at Governor Beshear’s press conference where he appointed her to the Kentucky Youth Bullying Prevention Task Force.

At just eight years old, Morgan was a victim of bullying. Too afraid to tell anyone, the bullying persisted to the point Morgan became physically ill. After experiencing stomach spasms and panic attacks, her pediatrician diagnosed her with clinical depression and prescribed her anti-depressants. This type of stress and anxiety from your average third grader is unheard of. Determined to turn from victim to victor, Morgan, with the help of her mother, created the Guess Anti-Bullying Foundation.

"So many people are not willing to stand up to hate in this world," said Susan Guess, Morgan's mother. "So many adults turn their heads to cruelty, while an 8 year old girl shows us that one person can make a difference."

With Kentucky leading the nation in teen suicide attempts, the efforts of the Guess Anti-Bullying Foundation is much needed. By providing education and resources throughout the community, Morgan is hoping to change behaviors and attitudes ultimately creating a kinder culture in Kentucky.

Since its inception over four years ago, the Guess Anti-Bullying Foundation has been a cornerstone for change in The Bluegrass State. Whether it's fund-raising efforts totaling nearly $75,000, or guest speakers reaching the ears of over 25,000 students, the Foundation has truly been inspiring.

Kentucky's former Governor, Steve Beshear, awarded Morgan the Kentucky Youth Volunteer Service Award, and in May she was named one of America’s Top 10 Youth Volunteers by the Prudential Spirit of Community Awards. Currently, she is lobbying for legislation to formalize a definition for bullying in the state of Kentucky as it is one of only two states without a formal definition. She has testified before the Kentucky legislature and her bill has passed the Kentucky House and Senate. She now waits for Kentucky Governor Matt Bevin to sign the bill.