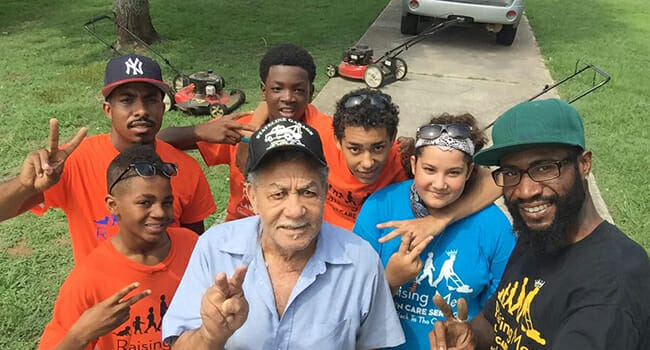 Last September, in the waning days of a still-hot Alabama summer, Rodney Smith Jr. noticed an elderly neighbor laboring to mow his lawn. “It looked like he was really struggling,” says Smith, now 27. “It seemed like I should do something.”

But helping out just that once and going about his business was not what Smith had in mind.

“I decided I would go ahead and offer to cut 40 lawns for people who couldn’t afford to hire someone by the time winter arrived,” he says. When he reached that goal in a month, he upped his desired total to 100 lawns. By mid-October he had achieved that mission, too. 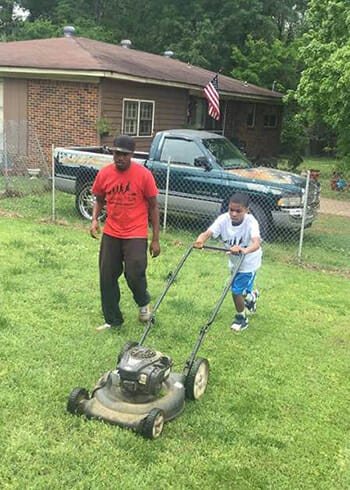 So, he decided to get serious.

“I decided to start a nonprofit,” Smith says. He called it Raising Men Lawn Care Service, because he thought working for others could teach some valuable lessons. After mounting an intensive Facebook campaign to recruit volunteers, he soon had a troop of boys between the ages of 7 and 17 ready to pitch in.

One year later, the nonprofit has a total of 45 young volunteers – and five of them are girls. “The young ladies that we have in the program work just as hard as the boys,” Smith says. “When some of the girls first came out, a few of the boys were shocked to see them but they showed the boys that they can do it as well!”

Each day, Smith assembles a small group of kids and they mow about five or six lawns, averaging about 30 minutes per lawn. “The kids learn a lot of teamwork and leadership skills,” he says. “The older ones teach the younger ones and everyone understands that by working together they get the job done faster.”

Other, more intangible lessons – like the value of giving back to the community – have been there from day one. When the program’s first volunteer, a 12-year-old named Ethan, arrived to mow his first lawn, “the woman burst into tears.” says Smith. “She had no family and was just so grateful. Ethan had the biggest smile on his face and he told his mother that he wanted to keep on volunteering.” 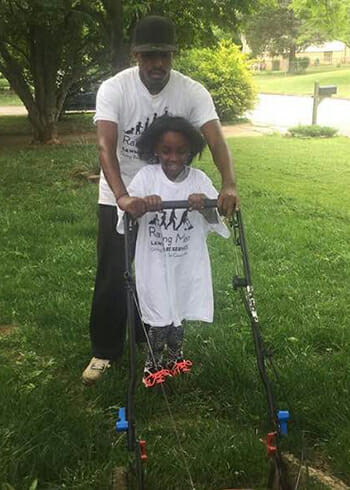 To make sure everyone has fun, Smith created a clever reward system based on karate traditions. “When they start mowing, everyone receives a white t-shirt,” he says. “Then they move on to orange, green, and blue, and when they’ve done 50 lawns, they get a black shirt.”

Raising Men offers its services to financially strapped homeowners, who are in need of a little extra help. “Whether they’re a single mother, veteran, or elderly person, they are so grateful, and they know their property is being taken care of,” Smith says. “That frees them up to use their limited resources for medicine or child care or groceries.

Meanwhile Smith, a Bermudan native who recently received a degree in computer sciences, is learning, too. “Each kid has a different personality and each homeowner has different needs and concerns,” he says. “I’ve had to adjust the way I deal with everybody and keep everything running smoothly.” So taken is he with the idea of serving others, Smith has also decided to pursue a graduate degree in social work.

And he continues to dream bigger dreams for the effort. “An 11-year-old from Ohio contacted me after he saw a video about my program,” he says. “Then a 7-year-old in Kansas did, too. They’ve been inspired to duplicate the program in their towns.” He challenged each to mow a certain amount of lawns by the end of the summer.

“I promised that if they did, I would fly out and give them a brand new lawn mower,” Smith says, noting that in addition to donated mowers from Briggs and Stratton, Inc., he has gotten commitments from two individuals to sponsor each flight.

As the idea spreads, Smith says he envisions Raising Men Lawn Care Service establishing a presence in all 50 states. And, he adds, there could be spinoffs: maybe car repair, or plumbing services.

“Lots of people need help and lots of kids need trade skills,” he says. Observing that helping out and giving back are the Bermudan way, Smith adds, “my parents love that I came up with this stuff and they are very proud of me.”