Caleb Smith isn’t your average 12 year old.  The sixth grader is running a non-profit with 35 kids and adults, oversees finances and board meetings and is always thinking about new revenue streams and ideas.

He’s also nuts about bunnies.  Smith, who lives with his parents Ross and Stephanie Smith in Minneapolis, is the founder of STEM Bunnies, a non profit that fosters science, technology, engineering and mathematics learning through curriculum designed around rescued rabbits.  Founded a little more than two years ago, when he was 9, STEM Bunnies has expanded into five states, offering interactive learning adventures at underserved schools, with cuddly bunnies demonstrating real deal vet science. More than 3000 kids have experienced the program to date.  Bunnies also earn their keep starring in kids’ birthday parties and community events that have paid for rabbit care or paid it forward for low income school visits. 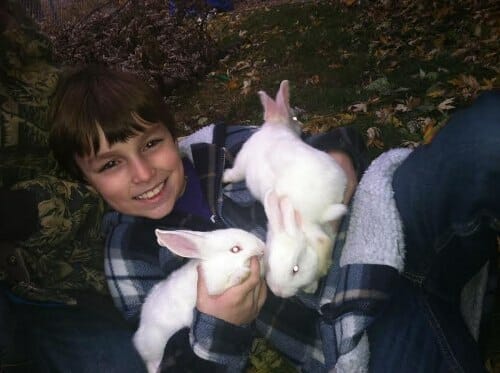 Caleb, STEM Bunnies founder, cuddles up with some of his furry friends.

While the initial goal of STEM Bunnies was education and rescue, Stephanie Smith said that it soon became apparent that the bunnies weren’t the only ones being rescued.

“We saw that something else was happening,” she explained. “Handling the bunnies was calming and therapeutic for the kids.”  The Peacebunnies Unit was formed, working its magic with kids with autism spectrum, grieving or with special needs.  Bunnies visit hospice centers and spend time with first responders in the wake of a disaster.  “It’s really something to see,” she said.

The idea for STEM Bunnies occurred to Caleb after he lost his bestie pet rabbit Snickers, and was researching finding the right next family bunny.  “It’s a 10 year commitment, so we all take it very seriously,” said his mom.  What Caleb found online on sites like Craig’s List was a glut of rabbits in need of rescuing.  “It was right after Easter, and in doing his research, he found 362 rabbits in need of homes. We live in Minneapolis – not on a farm, so I told him if he could figure out a business plan or a way to make rescuing rabbits possible, we would support him.”  With the help of a network of teachers and moms and an army of Caleb’s friends and partner farms, STEM Bunnies was born.  Among the rescued bunnies are 120 endangered heritage breed rabbits including the American Chinchilla, which numbers less than 150 registered in the world. Shearing this fluffy Angora rabbits like a sheep offers the non profit yet another revenue stream as the wool is prized and hard to come by.

While Caleb’s mom agrees that her precocious son is quite the entrepreneur, she said many kids involved in the program have simply remarkable ideas.  “It’s really up to us as adults to give them room to explore ideas. We continue to be surprised at just how STEM Bunnies is working. It creates a new model for animal rescue that focus on education not just on saving an animal. That’s sustainable.”