The Murray Family is one of 10 service-minded families being recognized by Points of Light and Disney in honor of Family Volunteer Day, Nov. 21.

Born during the Great Depression, young marrieds Jerome and Grace Murray always made sure to include modest charitable giving in their budgets. As their fortunes grew, the couple — who were married for 60 years — continued to consider how they could ensure that their money would continue to do good. Today, more than 150 of their direct descendants are providing an answer; this year alone they cumulatively donated just over $750,000.

“My grandparents wanted a way for all of their children, and their children’s children, to stay connected after they were gone. Starting a foundation was their answer,” says Betsy Russo, 53. “It’s a bonus that we are a very prolific family.” 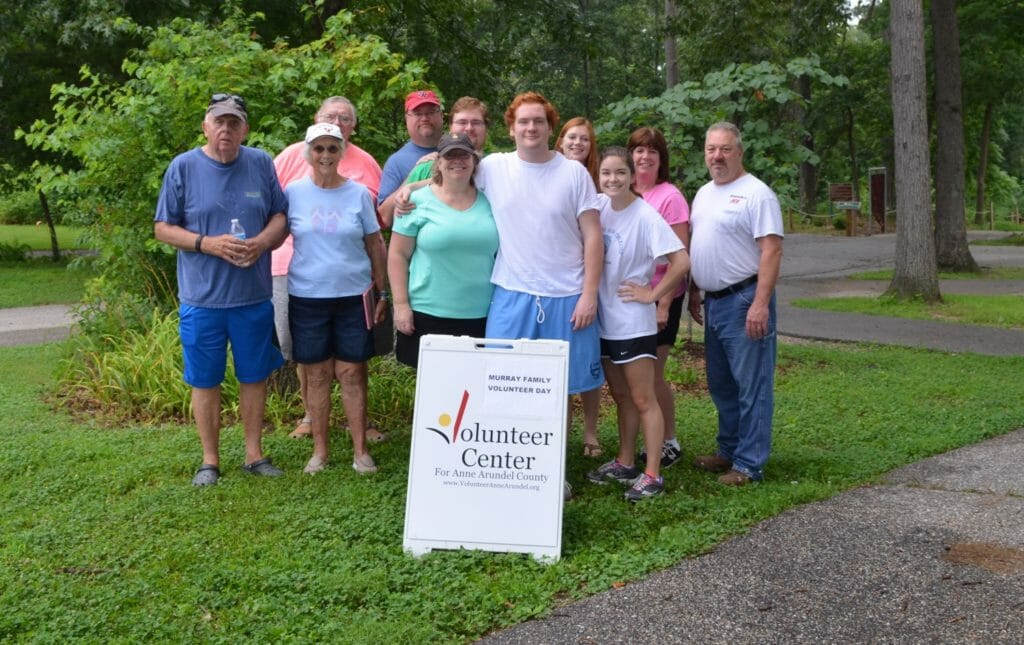 Some of the Murray descendants at the Murray Foundation Volunteer day in July 2015. .

By the time the couple decided to establish the foundation, they already had a focus. Spurred by the discovery that one of Betsy’s children was developmentally disabled, Jerome and Grace decided to make helping those with mental, emotional, and physical disabilities (and their caregivers) a priority. Based in Owings, MD, the Jerome S. and Grace H. Murray Foundation opened for business in 1992 after both founders had passed away — and it hasn’t stopped giving since.

It’s truly a family affair. Each year, every participating lineal descendant has a certain amount of money allotted to them (starting with those between the ages of 6 and 12, who each receive $200 a year) to donate to a nonprofit. Money that is left over or not used is pooled and divided up among eligible members (those over 18), who can use the funds to support larger projects. Often, members bundle their allotments: recently, 14 sponsors joined forces to donate $92,000 to a community farm.

“Traditionally, foundations have boards and [an] elaborate approval system,” observes Eileen Dillon, 78, Betsy’s aunt and one of Jerome and Grace’s ten children. “Here, no one’s in charge. No one’s saying you can’t do that. It’s amazing to see the results — there’s a whole gamut of support given by people who seek out projects based on their own interests.”

One of Eileen’s nieces, for instance, is a teacher in a low-income neighborhood in Annapolis, MD. She chose to use a portion of her foundation money to buy books for her school. Two other family members donated to a local hospice in memory of their grandmother.

Still another descendant volunteered at a therapeutic equestrian center, sharing her love of horseback riding with children with physical and emotional disabilities. Service grants like these are a popular choice for younger members, about a dozen of whom are great-great-grandchildren of the founders. The time that they volunteer is matched by a monetary grant from the foundation, making their efforts twice as impactful. “It’s really exciting to see this latest generation getting so involved in giving,” says Eileen.

The passion in service is instilled early. Betsy remembers her father, Denis — one of Eileen’s brothers — taking her children with him on field trips to show them where he was donating money. “From a young age, my children and their cousins were all very aware of what the foundation does and how it’s a big part of their family,” Betsy says.

However, to make a difference, a family doesn’t need to start with a multi-million dollar establishment as theirs did, the Murrays point out. “A mom can encourage her six-year-old to go through all of her baby books and then help her find somewhere to donate them,” says Betsy. “What’s important is to show kids how you can work together to make a difference in your community. What brings you greater happiness? Buying more Pokémon cards — or spending quality time with your family?”

Eileen has the last word. “This is a gift that we all have been given,” she says. “Being able to share it is a really wonderful legacy.”