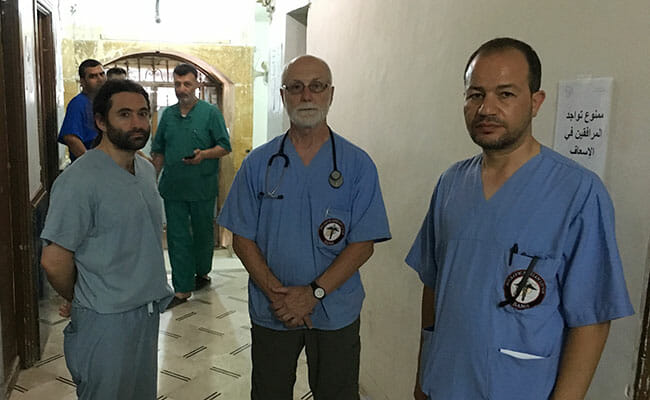 Courtesy Zaher Sahloul
Samer Attar, John Kahler and Zaher Sahloul at a hospital visiting a fellow doctor, who was killed in a Russian airstrike.

A Syrian child was asked to draw a picture of what his life in Aleppo looked like. If you asked a child living in the United States, you might expect to see a picture of the child with his family and friends or maybe playing outside. But what Samer Attar saw was different.

“This child drew a picture of his friends dead and bleeding, dismembered,” said Attar, a doctor who volunteered in Syria. “His house was being bombed by helicopters.” 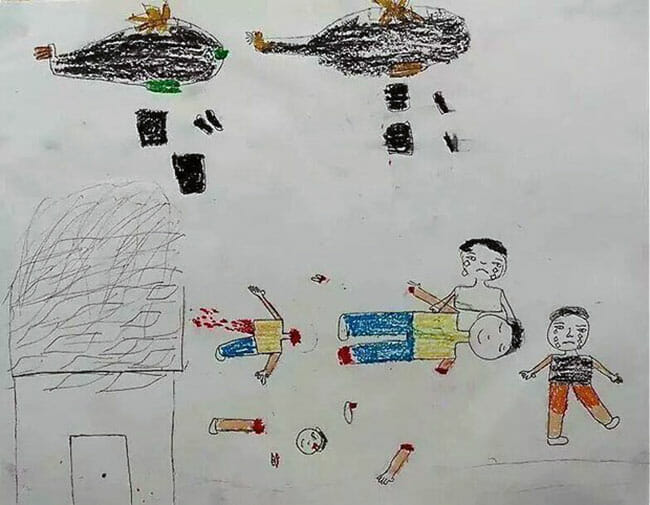 And at the center of the drawing was the child, crying.

Attar and Sahloul first visited Aleppo for medical missions in 2013.

“The first time, it was similar to any other city,” Sahloul said. “The streets were full with people and traffic. … The fruit markets were full with food and vegetables. Hospitals were working as usual with no shortage in supplies.”

But in late 2013, the Syrian government started deploying barrel bombs, which are improvised explosive devices. That was when the real damage started happening.

“They’ve been using it within the communities of Aleppo, bombing neighborhood after neighborhood, forcing people to flee,” Sahloul said. “And also targeting hospitals … more than 750 doctors and nurses were killed in Syria. More than 260 hospitals were bombed.”

Now, Sahloul can only describe Aleppo as a post-apocalyptic scene you’d see in a movie like “Mad Max.”

“It’s a catastrophe,” Kahler said. “You rarely find a building that hasn’t been damaged and the hospital we were in, M10, was underground because it had been bombed three times. … About two weeks ago, with the intensive bombings and use of heavy ordnance, M10 was actually bombed out of existence.” 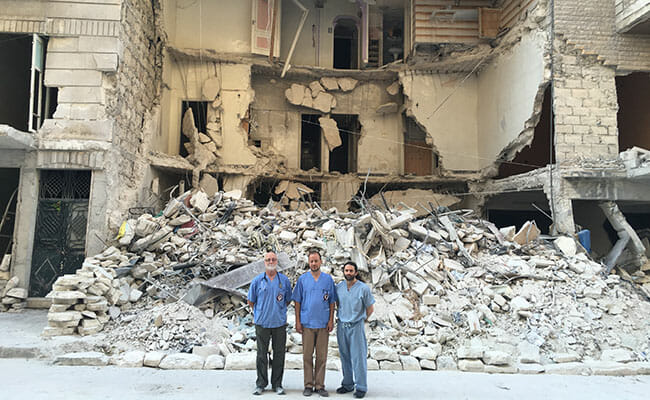 Courtesy Zaher Sahloul
Kahler, Sahloul and Attar in front of a building destroyed by a barrel bomb.

There are only 30 local physicians left to treat Aleppo’s remaining population of 300,000.

“It’s a level three emergency, as we call it, where you have an influx of a large number of patients, but you aren’t able to save all of them because of the limited resources,” Sahloul said.

Attar remembered stepping over patients because there was nowhere else to put them except on the floor.

“In Chicago, I see one patient at a time,” Attar said. “In Aleppo, you see 30 people all at once and it is overwhelming, but I was surrounded by local Syrians that have been doing this unfortunately for years. I followed their lead and did the best I could to help them and assist them.”

For background noise, the doctors had the sound of helicopters, jets, bullets and bombs.

“That was like cars honking and birds chirping in Aleppo,” Attar said. “You just get used to it.”

Bombs were constantly being dropped near the hospital, sometimes just 100 feet away. But instead of fearing for their own lives, the doctors focused on saving the patients in front of them.

“I remember one night, it was when I was first there, there was a child brought in from an airstrike by strangers,” Attar said. “He was a total mess. He wasn’t breathing. He wasn’t conscious. He had a hole the size of a football on the inner side of his thigh, and his femoral artery, [a] major blood vessel, was torn open. … When you hear about a case like that, you might think it’s hopeless, but everyone there played a role. One surgeon was holding his artery with his bare hands, holding it shut. Someone else was doing chest compressions. Someone else was putting in an IV.”

After a successful surgery, the child woke up and was able to give the doctors his name. The doctors found his father and Attar remembered seeing the father sleep underneath the child’s bed so he could be close to him.

“You do see a lot of suffering and death, but it only takes one experience like that to keep you going,” Attar said. 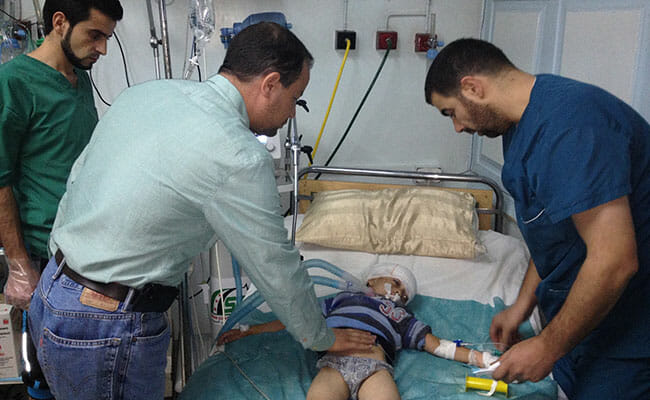 Courtesy Zaher Sahloul
Sahloul taking care of a 3-year-old boy who was shot by a sniper in the “Corridor of Death,” a path connecting east Aleppo to Western Aleppo.

Aleppo is now completely under siege. No one can get in or out. Attar, Kahler and Sahloul are back in Chicago, living their normal lives, but Aleppo is still on their minds.

“You know [bombings are] still happening and you know that you have friends and colleagues and patients that are still suffering,” Attar said. “You feel kind of powerless and helpless because you can’t stop it and you know it’s still going on.”

With the lives of these innocent Syrian civilians on the line, Sahloul said that awareness is not enough.

“I think the most important thing is for people to speak up and advocate and have a sense of urgency of the situation,” Sahloul said.

What can you do?

Donate money to organizations that are specifically helping Syrian civilians, refugees and doctors such as the Migrant Offshore Aid Station, Save the Children, or Doctors Without Borders.

Volunteer domestically with the International Rescue Committee to mentor refugee families and help them develop job skills. Consider volunteering with your local HandsOn Network volunteer center or search for local volunteer opportunities at All for Good.

For more about how to help, check out this article from The Guardian.