“I’m a sculptor and have been for 20 years — I know how to think spatially.  That’s kind of a gift that I have to give.  If I can look at a pile of junk and see how it goes together and make something, that’s probably what I should do,” says Vicki Wilson, who transformed a weed- and trash-strewn vacant lot from a neighborhood eyesore into an inviting garden, lush with fresh produce for the taking.

Wilson and her husband, John Larsen, both artists, live in an older area of Portland, Ore., which is rich in diversity – residents represent a wide range of income levels, ages and ethnicity.   But it’s also a so-called “food desert” in that it’s short on places to buy affordable fresh fruits and vegetables.  Near the end of 62nd St. and Powell Blvd., a large asphalt lot where an old gas station had long ago been razed, sat empty for years.  Buried tanks made it unsuitable for development because of the high cost to remove the tanks and contaminated soil. But Wilson and Larsen saw a canvas waiting to be filled. 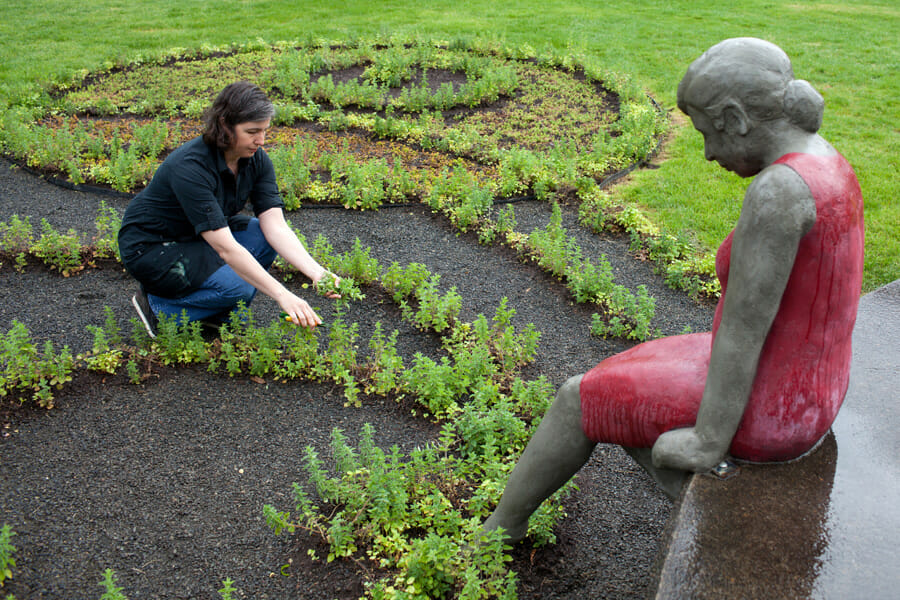 “I thought it looked like an art project in the sense that we would let people know we cared about the neighborhood,” says Wilson.  The Oregon Department of Transportation, which owns the land, was wary at first of simply displaying “public art” there, but when Wilson and Larsen suggested a garden that would neither disturb the underground tanks, nor require electricity or running water, it fit well with the agency’s conservation goals.  In just two years, the 62nd Ave. garden, Foster-Powell Community Garden, is producing food that is offered for free to the public, and has become a relaxing, flowery spot where neighbors can socialize.

For residents in the Foster-Powell community on Portland’s southeast side, the old vacant lot formed an unattractive entrance to their neighborhood.  Located near a bus route and busy thoroughfare, the site had become an unofficial dumping ground for everything from litter to broken furniture, according to Allyson Greazel, who lives next door.  “It was literally a barren wasteland and now it’s amazing,” she says.  “It’s a mini eco-system,” says Greazel, who is trained as an environmental geologist.  “I never saw bees in the neighborhood before.  Now we have bees and butterflies.  It shows that brownfields or contaminated sites don’t need to be left in the dust — they can be reused for the common good.”

The Foster-Powell Community Garden has done more for the neighborhood than improve its appearance.  It’s created a joint project and social spot that’s bringing together neighbors of varied cultures and backgrounds.  Apartment -dwellers with no yards of their own delight in caring for and enjoying the garden.  Bicyclists and pedestrians find the nook a welcome place to stop and rest.  Oregon Tradeswomen, a group that teaches teen girls how to use power tools so they can get construction jobs jumped at the chance to build a storage shed for the garden.

Wilson and Larsen want everyone in the neighborhood to feel welcome at the garden.  They designed a prominent welcome sign that greets visitors in Russian, Chinese, Vietnamese, Spanish and Korean, as well as English.  “Everybody wants that crossover within cultural groups,” says Wilson, “but it can be hard to make that happen.”

Greazel says the improved camaraderie has inspired her own idea to install a “Little Free Library” in her yard, where neighbors can “take a book and leave a book.”

Designed to be both visually artistic and practical, the garden consists of a series of raised beds, avoiding the need to disturb the ground.  Two large cisterns collect rain for watering the plants.  Rain gardens are installed next to each cistern to make good use of overflow.  Some of the raised beds are rented by individuals for their own use, but the largest bed is planted with vegetables and fruit trees meant to be shared with the community.  Flowers and shrubs, dominated by native species that thrive naturally and require less watering, provide color.  Plenty of solar-powered lights brighten the once-dark spot.

Wilson deftly secured both grant money and donated materials to make the garden a reality.  She’s good at appealing to volunteers to contribute ongoing labor.  School groups sometimes show up unannounced, eager to help out.

Wilson and Larsen maintain a web site dedicated to the Foster-Powell Neighborhood garden, to which they post continuous updates and blogs.  They remain active in the neighborhood association overall and have also founded the Foster Window Project, which designs and creates artworks for display in storefronts along Foster Road.