Sophie Bernstein always wanted to grow her own garden. At 12 years old, she was looking for a meaningful project to complete for her bat mitzvah – something that would serve a larger purpose and help the community. Sophie realized she had the perfect opportunity to start her garden, while also benefitting others by donating the crops that her garden produced to the local food bank. She had no idea where that project would take her.

After delivering her first harvest of fruits and vegetables to the food bank, Sophie was surprised by the absence of produce available to shoppers. Many of the shelves were stocked with items like potato chips, candy and sodas. Sophie took some time to educate herself on the prevalence of hunger and obesity in her home state of Missouri—finding that is the state has a high rate of childhood and adult obesity, as well as a high rate of families that have a hard time providing healthy options for their children. She realized she could make a difference by promoting healthier choices at food banks. 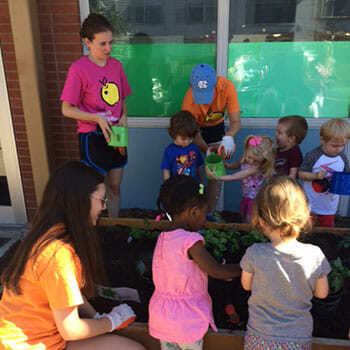 Since starting the garden in 2012, Sophie’s efforts have broadened exponentially. What started as one garden eventually grew into an entire movement, called Grow Healthy. “I started expanding my garden project to local daycares that were low-income, so that the families in need, if they wanted to, could use the produce,” said Sophie. “We also have an emergency shelter for children in our communities who are homeless or whose parents are in the hospital or in prison, so I donated and built gardens there.”

After the events in Ferguson took place in 2014, Sophie knew she wanted to help. “We are only a few miles away from Ferguson, Missouri, so I wanted to do more” she said. “I reached out to low-income daycares in that region and there was also a shelter for teens and at-risk youth. So we built gardens at those sites as well.”

Based on need, and the fact that her efforts have been so well received, Grow Healthy gardens continue to grow and expand. “We’re up to now 35 gardens and over 750 volunteers have helped,” Sophie said. The project has also helped bring people together from all walks of life.

“We’re a group of kids that are diverse, we have people from seven different countries, every religion, different sexual orientations, we have at-risk youth, we have youth with special needs that are all volunteering,” she said. “I think it’s that unity and understanding, and bringing that group of people together for a common goal.”

What Sophie wants people to know about her success is that everyone holds the same abilities within them, and everyone can make a difference, regardless of age — all you have to do is find your passion. “It’s finding out what your passion is, and finding a way to give back within that.”

Find opportunities to get involved in your community at www.allforgood.org.