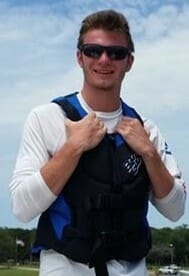 In North Texas, where Zach Bentley serves as a Ready Corps AmeriCorps member, the local American Red Cross responds to an average of six local disasters every day, the majority of which are home fires. The best way to save lives is to prevent fires from happening in the first place, which is why Zach joined the Ready Corps program in May 2016.

Zach originally had plans of becoming a firefighter and joined Ready Corps to work with the fire department on projects benefitting the community. Ready Corps, an AmeriCorps program implemented by Points of Light in partnership the Corporation for National and Community Service, creates resilient communities by increasing disaster preparedness of individuals and families through volunteer engagement. Zach serves at the Dallas chapter of the American Red Cross.

Zach began his term of service by reviving the organization’s community events team, attending 17 events and reaching more than 5,000 people. Zach’s hard work paid off and at one event he helped the Red Cross raise more than $166,000.

A big part of Zach’s job at these events was recruiting volunteers. A lot of people Zach met were interested, but didn’t exactly know how to get involved. By talking with the volunteers and learning about their skills and abilities, Zach matched them to the right volunteer opportunity, transforming interest into engagement.

After proving himself at these events, Zach took on the coordination of the Home Fire Prevention Campaign. Zach started by coordinating seven small events focused on installing smoke detectors. These events can be critical in saving lives.  If a fire starts in your home you may have as little as two minutes to escape. The fire death rate in homes with working smoke alarms is 51 percent less than the rate for homes without this protection.

Annually, the Red Cross hosts a large scale HFPC which typically targets about 950 homes. Zach worked with North Texas Red Cross CEO Keith Rhodes to develop a plan to expand the event without any budget. The event was a huge success, engaging three fire departments, ten different agencies and a total of 250 volunteers to reach 2,323 homes. It was one of the largest HFPC event the American Red Cross has done nationally in the history of the program.

For Zach the event was both professionally and personally rewarding. “AmeriCorps has given me the opportunity to succeed in ways I’ve never thought of and I will always be an advocate for AmeriCorps,” Zach said. “The first time I told my parents that I started working with the CEO, they did not believe me! AmeriCorps made it possible for a 19 year old kid, who was a class clown in high school to now be making history at a nonprofit and working directly with the CEO.”

Zach’s term of service concludes this week, but he will continue to be an advocate for fire safety. You can get involved by learning more about the Red Cross’s Home Fire Campaign, which has a goal of reducing fire-related death and injuries in the US by 25 percent by 2010.