My AmeriCorps service year has been a huge part of my development both professionally and personally. The act of service is an integral part of the community I was raised in. My family and I immigrated to the United States at a young age and settled in the Pacific Northwest where we were met with a community of people who shared our background. We were immediately drawn to each other and supported one another through the difficulties of building a life in a new country. The kindness and service of others has been lifechanging for me and my family and because of that, the importance of service was instilled in me early on. 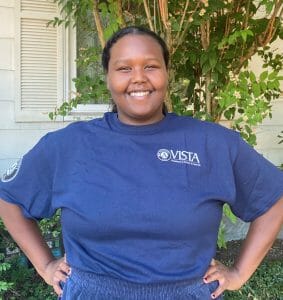 When I became a barista at Starbucks, I wanted to play a bigger role in the community I worked in. This meant doing my own research to learn about the needs in my community and how I could get involved. I found an organization near my store and was able to host a diaper drive in support of them. This was a great way for me and my fellow baristas to become engaged in community service. This experience made me curious about other ways I could lend my hand. After some digging, I learned of a program through Starbucks called The Starbucks Foundation Service Fellows (a program developed in partnership with Points of Light). I joined enthusiastically and was placed at an organization called United Way of King County, not knowing what this organization would have in store for me.

During the seven months of this fellowship, I worked with the Volunteer Engagement Team where I supported Martin Luther King Jr. Day of Service, built relationships with community-based organizations and was able to try my hand at a small amount of grantmaking. It was so exciting to engage with community in this way and to gain new skills while doing so. I didn’t want this time to end so I investigated ways I could continue to support this organization. I learned of a program called AmeriCorps VISTA or Volunteers in Service to America, in which an individual works a full time, one-year term at an organization to help build their capacity. This was just what I wanted. I was excited about the possibility of doing this work for an entire year. Shortly after my fellowship ended, I began my AmeriCorps term working on an early learning program called ParentChild+.

I worked with a brilliant team in the education department where I learned that achieving education equity started at an early age and that we needed to be strategic about how we made sure that children who are Black, Indigenous, and People of Color (BIPOC) have equal possibilities in the American school system from the start by providing culturally relevant educational support through this program. This was a huge turning point for me as I realized that a program like this could have been so helpful to me as a child. I learned that the number of BIPOC children who are not kindergarten ready was disproportionately higher compared to their white peers and I felt a connection with that experience. Throughout the year, I was encouraged to provide input on decisions made about the program and to continue my learning and participation in other areas of the organization, as well. I was a sponge during my term of service and learned, more intimately, about the needs of the community and how to think strategically to address the inequities that affected BIPOC communities, which included my own.

While I gained so much from my year of service, it was not without challenges. AmeriCorps has historically been a program that pays a living stipend under the federal poverty line. It was a challenge to support anti-poverty work while making such a low monthly stipend. I can imagine that for other BIPOC AmeriCorps members, who similarly may not have the generational wealth that others have to support them through the program, it was a challenge too. For the program to encourage more BIPOC individuals to apply and serve, I think it’s imperative that AmeriCorps members are paid a livable wage and that we acknowledge the important lived experience of BIPOC members who are uniquely positioned to respond to the tragedy of poverty that disproportionally impacts BIPOC communities.

My time as an AmeriCorps has come to an end, but I’m excited to take the skills I learned and transition them into my new position as a volunteer engagement manager at the same organization I served with, United Way of King County. I know my AmeriCorps service year was a huge part of the reason I got this opportunity and I’m so thankful. My commitment to service has taken me in many directions but it culminated in committing a year of my life to serve as an AmeriCorps VISTA. It was truly a life changing year.