Last week, I had the honor of attending an extraordinary event in Washington, D.C., to launch the national campaign to inspire one million acts of service on the 9/11 National Day of Service and Remembrance. I joined 9/11 families, first responders, military and members of Congress to stitch the National 9/11 Flag, damaged in the collapse of the World Trade Center. It was a moving and emotional event, and the perfect way to give the anniversary of the attacks a positive meaning. 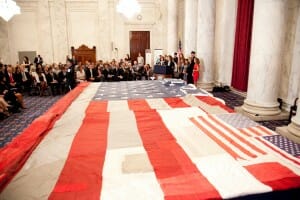 Sept. 11, and honor the victims, heroes and all those who rose in service in response to the attacks that forever changed our nation. We put aside politics and gathered more than 40 Democratic and Republican leaders of Congress – including Rep. Peter King, Sen. Charles Schumer and Rep. Nancy Pelosi – to jointly participate in a unique ceremony that embodied the American spirit of hope, resilience and strength.

Jeff Parness, founder of the New York Says Thank You Foundation and a leader in the effort to restore the flag, told the assembled audience that this is “what America is all about.” He said this flag “tells the story of 9/11, but also of 9/12,” a nation able to come together and rebuild from tragedy.

Ten years ago, in the aftermath of the Sept. 11 attacks, we were mourning those lost and trying to make sense of a senseless tragedy. Through collective grief, scores of Americans acted on our innate nature to serve and sought out ways to lend a hand, offer comfort and, ultimately, create positive change in our communities.

The number of volunteers spiked and reached an all-time national high in the immediate aftermath of September 11th – a manifestation of the impulse we all felt to unite and mend the wounds of the nation.

As we mark the 10th anniversary of Sept. 11, 2001, we have the opportunity to create a permanent and positive legacy that rekindles the spirit of unity that existed immediately after that day, and honor the victims, heroes and all those who rose in service in response to the terrorist attacks that changed our nation.

The 9/11 Day of Service and Remembrance – formally designated by Congress in association with the Edward M. Kennedy Serve America Act passed in 2009 – is the day we remember and give tribute by doing something from our hearts that benefits and enriches someone else. We do something meaningful in memory of others. It is an important national milestone that brings us together through the powerful and unifying force of service. 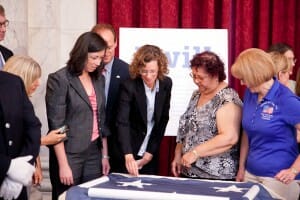 The 9/11 Day initiative is led by MyGoodDeed.org and Points of Light Institute‘s volunteer activation division HandsOn Network. MyGoodDeed was founded by David Paine and Jay Winuk, who lost his brother Glenn in the collapse of the World Trade Center. Glenn was a lawyer and a volunteer firefighter who ran into the South Tower to help. Glenn’s heroism and devotion to community service inspired Jay to work with other family members to create MyGoodDeed and work to establish 9/11 as the National Day of Service and Remembrance.

MyGoodDeed and Points of Light’s Hands On Network will work in partnership with the 9/11 Memorial, Business Civic Leadership Center, AARP and The Mission Continues and thousands of other organizations to promote the observance of 9/11 through service. This effort is generously supported by American Express Company Foundation, GlaxoSmithKline, JPMorgan Chase and Best Buy.

As the activation partner, HandsOn Network is creating opportunities throughout the country to create one million acts of service and build an enduring movement and legacy event to annually pay tribute to our national spirit of giving.

We will partner with our local HandsOn Network affiliates to host leadership events in Boston, New York City, San Francisco and Washington, D.C., that will collectively engage more than 20,000 volunteers. These service projects will range from revitalizing local schools to supporting military veterans and their families, driving local emergency preparedness to engaging individuals in making long-term pledges to serve. Signature events will be driven by 20 additional HandsOn Network affiliates across the country, and countless organizations, communities and individuals will use 9/11 as a moment in time to take on the challenges they face.

A new “I Will” campaign will reach and inspire millions to participate in 9/11 Day. The campaign, which will include television, radio, digital and print messages running from Aug. 11 through Sept. 11, was designed by a powerful collaboration of creative organizations and will encourage all Americans to take part in the day.

9/11 is an extraordinarily powerful motivator for civic engagement. Independent research commissioned in 2010 by MyGoodDeed found that more than 60 percent of Americans today – and 84 percent of those between the ages of 21 and 35 – are ready to commemorate 9/11 through acts of charitable service or volunteerism.

Sen. Schumer told the crowd that there is “no greater thing for our country than to do a day of service.” There is “no more fitting memorial,” he said. To see news coverage of the event, click here.

To learn about service opportunities or find resources to give back, visit www.911day.org.