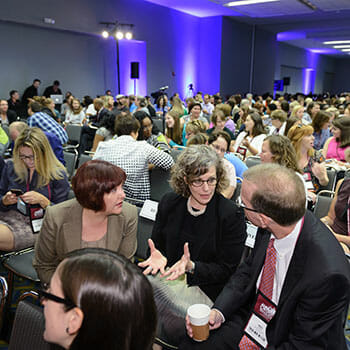 Today, many of the greatest minds in business, nonprofit, and government will come together, as they do every year at the Conference on Volunteering and Service, to immerse themselves in a festival of ideas and to foster creativity in solving some of our most pressing challenges. Their commonality: They believe the best solutions put people at the center of change. And this year, there is a reason they will come together in Detroit.

The Motor City is at an important transformational moment in its history. Citizen activists are leading change. Social entrepreneurs are igniting progress. Collaborations between business and community ­leaders are producing imaginative new solutions to old problems. Detroit is seeing neighborhoods come back to life, with residents leading and benefitting from new businesses opening up, and experiencing a renewed sense of spirit.

As toxic rhetoric polarizes us, and economic and social disparities divide us, it is more critical than ever before that we lift up examples of what is right in America. To acknowledge that every person has a role to play, that real problem-solving happens at the local level, and that we are more alike than we are different.

This is precisely what James and Deb Fallows discovered when they researched and wrote a fascinating article in The Atlantic, “How America is Putting Itself Back Together.” The husband-and-wife team spent three years going from town to town across America to investigate for themselves what many have called “the unraveling of America.”

After 54,000 miles of travel and conducting countless first-person interviews, the Fallowses found the opposite. Americans, they concluded, are reinventing our country for the better, town by town. As James Fallows writes, “Many people are discouraged by what they hear and read about America, but the closer they are to the action at home, the better they like what they see.”

As they traveled the country, the Fallowses found common threads in what was working for cities that were experiencing growth and opportunity. There were tangible factors such as whether a city has a downtown, and interesting intangible factors such as whether the citizens knew their “civic story.” In Fresno, Allentown, and Detroit, for example, residents knew they lived in “turnaround” cities.

To the Fallows’ list of common factors, I would like to add a crucial one that I have found to be just as important: The role of changemakers working to improve the lives of others. At the Conference this week, we will hear from a number of extraordinary Detroit changemakers. With grit and determination, passion and commitment, they are leading transformational change in the Motor City.

From former design student Veronika Scott, who developed a self-heating coat that turns into a sleeping bag and a business around it that supports Detroit homeless; to Mike Ellison, a powerful artist and activist who is shining a spotlight on social change across the city; to 13-year-old social entrepreneur Asia Newson, who inspires and equips other young changemakers; to businessman Dennis Archer, Jr., whose father was mayor of Detroit and who is galvanizing cross-sector collaborations to support growth and opportunity for all of Detroit’s residents. And then there are the countless volunteers and social activists at the center of hyperlocal problem-solving who are building resilient communities.

I’d be willing to bet that in the dozens of successful towns and resilient communities that the Fallowses visited, local changemakers are leading transformation every day in ways big and small. James Fallows ends his report with this: “The people who have been reweaving the national fabric will be more effective if they realize how many other people are working toward the same end.”

If you’re joining us in Detroit, or livestreaming the sessions, you will see that reweaving taking place and realize just how similar our challenges are and how many people are working toward the same end.