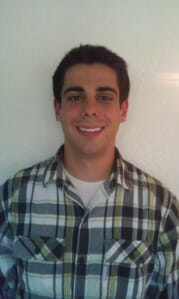 Today's post is republished from the AmeriCorps Alums blog from March 29, 2013.

HandsOn Tech Detroit compiled stories from AmeriCorps Alums in the Detroit area to highlight the work they did during their year of service. There is a lot of great work being done by AmeriCorps members in Detroit, and many of those who serve in the area stick around to contribute to the Detroit community after their year of service. We wanted to make sure their inspirational stories of service were shared.

I served in Michigan’s AmeriCorp program, through the Regents of the University of Michigan, during the summer of 2011.  I served in Southwest Detroit for Urban Neighborhood Initiatives (UNI), a small neighborhood nonprofit organization, for a total of 450 hours during that summer.

My service was amazing.  Southwest Detroit is a unique area of the city because of its rich Hispanic culture and overall diversity in the area.  I was specifically located in the Springwells Village Neighborhood which borders Dearborn on the west, Delray from the south, Chadsey-Condon from the north, and the Vernor/Mexican Town area on the east.

UNI asked me to coordinate a youth bike club that ran for six weeks during their summer program.  The bike club was very grassroots, mainly coordinated by a community volunteer and a social work intern in the past. The mission of the bike club was to teach young neighborhood kids how to maintain and repair bikes.  Further, the kids learned about the benefits of riding bikes and the importance of riding safely on the street. 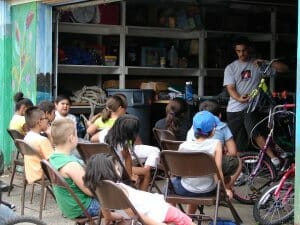 When I started in May 2011, it was clear to me the small, young program had great potential.  When I first began, I tried to learn as much as I could about the neighborhood, kids that I came in contact with, and especially the bike program.  The program was about three years old as of May 2011.  It was originally started by a group of kids who showed interest in customizing bikes. The kids would work out of the UNI Garage, and just fiddled around with their bikes.  Structure was added over time, with lesson plans focused on repairing specific parts of the bike so kids learned how to properly maintain them.  A few small grants were received to purchase proper bike tools and supplies. 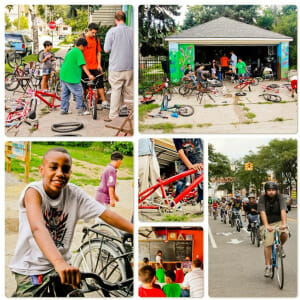 When I started, I built off the foundation that was there for me.  I added structure to the program by building additional lesson plans and keeping the shop open more hours per week.  I saw a lot of success the first summer I coordinated the shop.  We averaged 15 kids twice a week for six weeks; some days we had as many as 35 kids and other days (usually rainy days), only 5-10.  It was clear to me the kids really liked learning about how to fix their bikes, and they wanted to keep doing it.  In fact, at the end of the program, we went on a group ride to Clark Park, utilizing the bike lanes along West Vernor Highway.  The kids loved it!

At the end of August 2011, my AmeriCorp service officially ended, but my vision for the shop grew stronger.  A long term goal was to eventually build out a retail bike shop in the neighborhood, embedding the current education principles with youth entrepreneurship philosophies into the future shop.  I’m proud to say we’ve made real progress towards reaching this goal.  In the summer of 2012, I volunteered my time twice a week to work on opening the shop and build off the momentum that was created in 2011.  Summer 2012 proved to be another huge success with similar demand and more exposure in the neighborhood.

This year, a team of six adults (including myself) created a business plan, started a fundraising campaign, found space for the shop, and plan to open Southwest Rides: Boards and Bikes Shop in southwest Detroit in summer 2013.  The process has been long and taxing, but well worth it.  I don’t expect to make huge profits or become famous, but I do intend to continue to make an impact in Springwells Village and Detroit as a whole.

My biggest take away was seeing how much I could make a difference in the kids’ lives in such a short period of time.  Within three months, I connected with almost every kid who came in to the bike shop.  Whether they just wanted to learn how to fix bikes, or they were looking to earn a bike, every kid was eager to listen and learn.  The kids really loved the shop as it provided an educational opportunity that they could not get in the K-12 school system.

My AmeriCorp placement is the reason I am living, working, playing, and giving in Detroit today.  When I was in school at the University of Michigan, I knew little about Detroit but became interested as soon as I visited the city for the first time. Now two years later, my amazing UNI experience showed me that like the bike shop’s potential, Detroit’s potential is amazingly endless.

Currently I am participating in the inaugural class of Challenge Detroit. Challenge Detroit is a national initiative focused on revitalizing Detroit by retaining and attracting top talent to bring their intellectual capital to the city. There are 30 fellows and each fellow works four days a week at their host company. I work for a financial software company called Billhighway.  When we are not at our host companies we come together to help various nonprofits fix some of the challenges that Detroit is struggling with today.

HandsOn Tech is a national program sponsored by a partnership between Google and Points of Light. This program is focused on increasing the nonprofit sector’s effective use of technology to increase community resources and improve outcomes for low-income communities. Serving in seven cities across the country, HandsOn Tech Detroit is one of the sites working to provide pro bono technology assessments, develop technology plans, and offer professional consulting, training, and resources to build capacity and support for qualified nonprofits. Click here for more information about HandsOn Tech Detroit.