In the smartphone era, we are constantly searching for innovative ways to automate our lives and creating technological solutions to the world’s most pressing issues. Volunteer Houston, a Points of Light Affiliate, is one of many organizations joining this trend.

In spring 2016, Volunteer Houston became one of the first volunteer centers in the United States to develop a mobile application designed to engage volunteers by connecting them to nonprofit volunteer opportunities. Now, with more than 544 downloads, the app has already impacted more than 1,200 organizations in the Houston area. 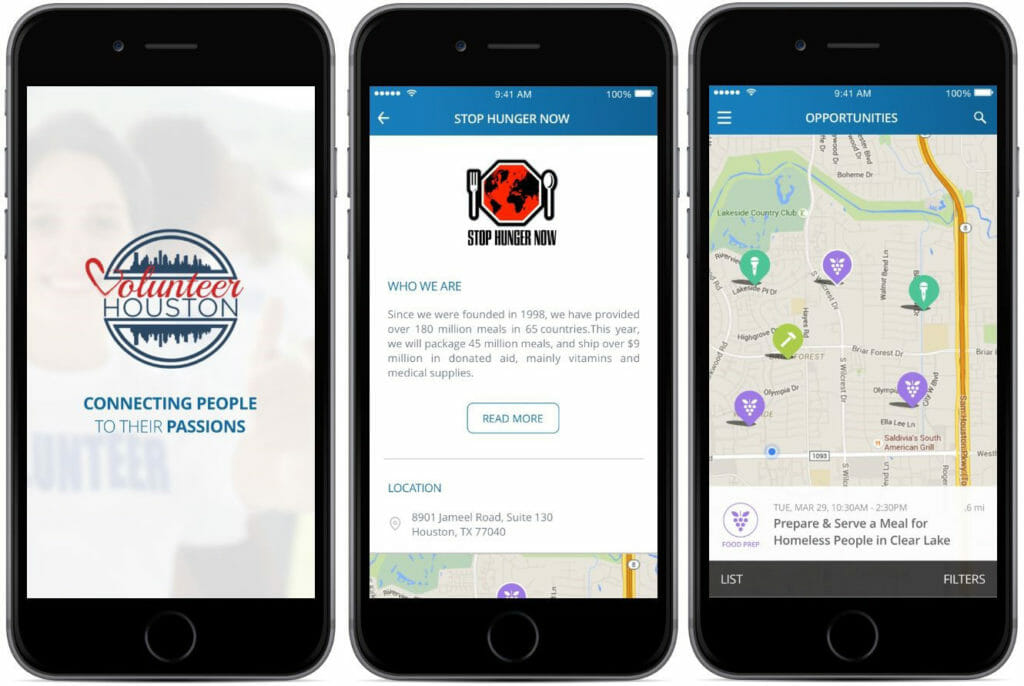 Though he was gainfully employed as a project manager for NAXION in Philadelphia, Rafay wanted to get involved in national service, while his lifestyle still permitted him to do so. His workflow management and consultant skills would be ideal for helping the technical development team turn the idea of the app into a reality.

The Houston Independent School District is one such organization, which Volunteer Houston expects will benefit from the app’s hour-tracking feature, beginning in the 2017-2018 school year.

Prior to this app, all hour tracking had to be done with pen and paper, creating greater room for error if students lost their hour sheets or forgot to log their service. The app is designed to provide automatic checks and balances to the process. For example, Cameron said, if a student “volunteered on the 28th of February with the food bank for 6 hours, [the app] sends it to the food bank administrator and they look at it and say, no it’s really 5.5 hours.” This reduces strain on the volunteers for tracking their own hours and provides more reliable data for Volunteer Houston to report.

With the app providing immediate access to hundreds of volunteer opportunities, there have been a number of positive effects on the volunteer process. By allowing volunteers to easily post their volunteer experiences to social media directly from the app, it has helped foster community awareness of nonprofit agencies and the opportunities they have available. It has also enabled a quicker response time for those in need – which could be particularly valuable for disaster response.

Coordinating with several local emergency management offices in the Houston area, Volunteer Houston will begin marketing the app during times of disaster as a better way to make volunteers aware of where help is needed and which organizations are leading response efforts.

Looking toward the future, Volunteer Houston has already begun working on plans to implement a geolocation function that will help the app track volunteer hours automatically by recording when the volunteer arrives at the physical location of the service project and when they leave. They are also working on plans to create sponsored incentives for volunteers. For example, once a volunteer reaches a certain number of hours, they might get a free cup of coffee or some other reward through email.

“It’s going to work, I think, to [create] a much larger gain than we’ve ever had in the past of connecting people with immediate need.”