More than 100 leaders in business, policy and civic engagement celebrated the continuing success of A Billion + Change on Monday with the announcement of 78 pledge companies and more than $1.6 billion of skills-based services contributed since the summer of 2011. Virginia Sen. Mark Warner, the campaign’s honorary chairman, announced this as part of a program hosted by Morgan Stanley at the company’s headquarters in New York City on International Corporate Philanthropy Day. The event recognized the innovative pro bono programs companies are developing to deliver high-impact services to address community needs.

A Billion + Change, housed and managed by Points of Light, is a national campaign to mobilize billions of dollars of pro bono and skills-based service from corporate America by 2013. The campaign is seeking 500 companies willing to pledge their best business skills and talents to serve the needs of nonprofits and communities at home and around the world. The campaign’s vision is to inspire the largest commitment of corporate pro bono service in history. 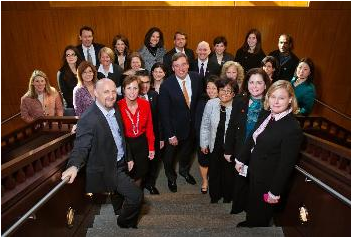 At a time when public resources for social services are stretched, Sen. Warner emphasized the salience and the critical nature of A Billion + Change. “As a percentage of our GDP, we are spending less on safety net programs in 2012 than we did in the 1960s. Future spending trends on these programs are also under great pressure. To be competitive, we need to spend more on things like education and workforce development, and nonprofit action in this sector will be critical,” he said. “A Billion + Change is an opportunity for businesses to get involved, not to just write checks, but to give their most valuable expertise.” Senator Warner also outlined the creative ways businesses are stepping up to invest in communities in a front-page article published by the Huffington Post on Monday.

The skills-based volunteer programs of campaign pledge companies are redefining what it means to help. Morgan Stanley’s annual Strategy Challenge, for example, has delivered more than 14,500 hours of pro bono services to 36 nonprofits across the nation, worth approximately $2.2 billion. One Strategy Challenge team was able to save New York-based New York Cares $30,000 annually by recommending improvements to its volunteer on-boarding process in 2009.

A Billion + Change is encouraging companies of all sizes across all sectors to achieve this kind of change. Pledge companies range in size from small businesses, like gothamCulture and AltruHelp, to large companies such as Nielsen, General Mills, State Farm, Hewlett-Packard, UnitedHealth Group and Morgan Stanley. To date, these companies have committed to give more than 11 million hours of time and talent to nonprofits by 2013.

Read more about A Billion + Change, see companies that have taken the pledge and follow media coverage of the campaign online. Photos of the event can be viewed on Flickr.

A Billion + Change was launched by the Corporation for National and Community Service in 2008 and continues as an initiative of the federal agency. Reinvigorated in 2011 with expanded leadership under the honorary chairmanship of Sen. Warner, it is now housed and managed by Points of Light. The initiative is powered by the support of Deloitte, HP, the Case Foundation and IBM with additional founding support from State Farm, McKenna Long & Aldridge LLP, and Morgan Stanley.