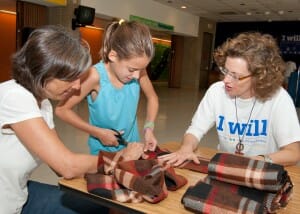 Michelle Nunn, CEO of Points of Light Institute and Co-Founder of HandsOn Network personally reflects on the 9/11 National Day of Service and Remembrance and the day that followed.

On Sept. 11, 2001, when  Glenn Winuk, a lawyer and volunteer fire fighter, ran into the burning buildings instead of running for safety, he did something both unexpected and also, evidently, completely in character. He did not follow his fear instinct; he followed his instinct to help. He was willing to sacrifice his own safety and, ultimately, his life, to ensure the safety of others.

Glenn’s brother, Jay, responded to the tragedy of 9/11 and the death of his brother in an improbable way as well. In grappling with his brother’s death, he decided he wanted to commemorate this terrible loss each year by asking us all to act upon our own instinct to help. He and his friend, David Paine, created an organization called MyGoodDeed. They worked against many odds and obstacles over the last decade to commemorate 9/11 as a Day of Service and Remembrance.

This unexpected response now seems entirely fitting. It helps us recapture the spirit that united our nation as we grappled with the tragedy of the 9/11 attacks. Ten years ago, on 9/12, people across the country and around the world responded with empathy and compassion. They reached out to support friends and family – and total strangers. The world embraced our nation with a spirit of solidarity, and the nation embraced the victims and their families with a generosity that took the form of uniting, giving and acting.

Ten years later, that unity seems to have been fleeting. But I believe it was recaptured, in some measure, over the last weekend in hundreds of thousands of acts of service. Points of Light Institute and our 250 HandsOn Network affiliates had the privilege of partnering with MyGoodDeed and a coalition of other organizations to activate one million people to pay tribute through service in commemorating 9/11.

Hundreds of thousands of people joined hands to give back, honor the memory of those victims and heroes that were lost and assert the nation’s resiliency and compassion. More than 12,000 people volunteered with HandsOn Greater DC Cares, an almost 80 percent increase year over year. HandsOn Bay area kicked off a documentary film series, “What It Means to Be an American in a Post-9/11 World” that will run throughout the month of September, bringing together hundreds to learn, discuss and address multiculturalism and look for solutions. Volunteers with Boston Cares planted 3,000 American flags in complete silence to honor the lives lost on 9/11.

All of this was made possible with private sector support. American Express inspired thousands of employees and customers to act and remember with the launch of their I WILL VOLUNTEER Facebook application and were the signature sponsor of the effort. National contributors included Chase, the events mobilization partner who focused on military families and veterans; Best Buy whose support enabled thousands to upload stories and post tributes on 911day.org; and GlaxoSmithKline, whose investment provided more than one million teachers with lesson plans and age-appropriate service projects.

This Day of Service and Remembrance was a reminder that, at our best, our nation addresses challenges and tragedy with compassion, generosity and service. This is a tribute to Glenn and Jay and the family, victims and heroes of 9/11 and those who have served our country in its aftermath.

On the night of the 9/11 anniversary, twin shafts of light illuminated Ground Zero in tribute. And throughout the day, a living memorial, a million volunteers, illuminated the nation through their acts of service.