On Sept. 22, 1961, Congress approved legislation creating the Peace Corps. This organization was born not of politics, but rather the enthusiasm and idealism of students responding to a speech by President John F. Kennedy that lasted less than five minutes. These students gathered signatures on a petition expressing support for President Kennedy’s idea and, buoyed by this response, the president went on to create his signature service program. 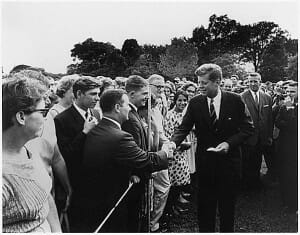 The Peace Corps has shaped the sensibility of our nation and it has become an iconic representation of our nation’s idealism. It has had a profound impact in shaping our relationship with the world, creating change on the ground in developing nations, and cultivating a leadership corps of Peace Corps Alums who have shaped our nation and its global interactions. Yet, it still stands at only 8,000 annual volunteers versus President Kennedy’s dream of 100,000 volunteers serving around the world.

As we mark the triumphs and continued aspirations of the program, it gives us an opportunity to think about the larger trends around international service and the opportunities before us.

On a personal note, when I graduated from college 20-plus years ago, I applied to the Peace Corps. I knew I wanted to be involved in service and I was committed to doing something internationally. While I waited for my Peace Corps application, I met a group of individuals who were starting an effort to mobilize volunteers in Atlanta and I became the first glorified, part-time executive director of a nascent effort called Hands On Atlanta. By the time I was accepted into the Peace Corps, I had found that I loved my domestic service work and deferred, focusing on building Hands On Atlanta and later HandsOn Network, which now has combined to form Points of Light Institute – with more than 250 HandsOn affiliates and a presence in 40 international cities.

I share this story because I think it helps illustrate the changing landscape of international service and three salient trend lines.

Twenty years ago, there was a fairly well-defined choice – serve domestically or serve internationally. Today, the lines are more blurred. Increasingly, young people are operating as global citizens. One of our Daily Point of Light award winners, Sejal Hathi, illustrates this trend. Sejal was a 15-year-old in a suburb of San Francisco who decided her mission was to empower girls in developing countries. She founded Girls Helping Girls (GHG), an international nonprofit that partners girls in the U.S. with girls in schools and communities in developing countries. The American and local girls jointly identify problems in those countries and develop programs to create positive change. 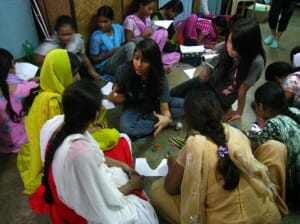 Today, those GHG volunteers have worked with 5,000 girls in 15 countries. They have also raised $40,000 to provide basic necessities to impoverished girls around the world. Sejal, who is now in college, continues to create change. She has amplified GHG into the Sisters 4 Peace Network, a social change forum that mentors and provides resources to girls who want to create their own destinies. I think we will increasingly see people participating seamlessly in both domestic and international service.

The second trend is the role that the private sector is playing in international engagement and development. The interactions of private sector marketplaces and charities are increasingly complex and interesting. I am participating in the Clinton Global Initiative this week in New York and the entire forum is a testament to the fact that efforts to tackle complex global problems necessitate a high degree of collaboration across all sectors.

International service is increasingly being dominated not by well-intentioned generalists like I was when I volunteered for the Peace Corps 20 years ago, but well-intentioned business specialists – engineers, medical technicians, scientists, agricultural economists who are lending their technical expertise to the social and economic development work being done by members of local communities – all hearkening back to President Kennedy’s call 50 years ago. NGOs and the Peace Corps are looking for skilled volunteers.

And international service is now being adopted by businesses in creative new ways. Corporations like IBM, Dow and Pfizer are deploying their most capable professionals in focused projects across the globe to create transformational impact. IBM’s Corporate Service Corps, for example, has deployed 1,000 skilled volunteers over the last year to implement extraordinary projects in countries around the world, and has become a model for other businesses that seek to replicate and expand their own efforts. Points of Light Institute’s Corporate Service Council and many of our partners – Brookings Institute, Clinton Global Initiative, the U.S. Chamber of Commerce’s Business Civic Leadership Center – are exploring ways to effectively scale these corporate models for international engagement.

Corporations are empowering not only their employees to give back, but also their customers. MissionFish, an initiative that started with Points of Light Institute and now is fully incorporated and run by eBay, allows individuals to contribute a portion of their purchase or sale to the charity of their choice. In eight years, it has raised close to more than $241 million dollars for international charities.

So people are now able to leverage their time, their skills, their philanthropic dollars and their purchasing power to create change in the international arena – and they are doing it as volunteers, as social entrepreneurs, as employees and as customers.

Finally, my third point is that what Tom Friedman has famously called our “flat world” has created international service that is increasingly reciprocal and circular.

Gianna Montinola, the founder of HandsOn Manila, is a terrific example. Gianna volunteered with HandsOn Phoenix until she moved back to her native Philippines. There she recognized the need to start a similar organization. HandsOn Manila builds on the local concept of bayanihan, the local term for getting together to help someone in need. But it applies this value to a model of flexible volunteering borrowed from the United States. In the last 10 years, it has grown to engage 8,500 volunteers. 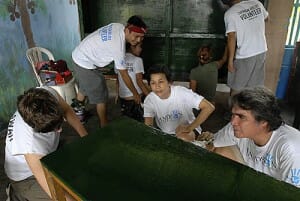 HandsOn Manila has hosted international teams around disaster relief, has brought back innovations that have been modeled by our domestic affiliates, such as creating CDs to raise money and partnering with corporations like Accenture, Chevron, InterContinental Hotels and Starbucks. It has launched a HandsOn Vacation program, hosting international volunteers to work on ecological, heritage and disaster response efforts.

There is, again, a blurring of lines. With the strengthened volunteer and civic infrastructure in countries around the world, so-called international volunteers will increasingly be working side by side with indigenous volunteers. A program like Atlas Corps is now bringing rising leaders from around the world to the U.S. to serve for a year with U.S.-based nonprofit organizations.

With this change comes a change in mindset. No longer will we think in terms of helping people in need “over there,” but rather we will think in terms of how we work together to build a better, more sustainable world for us all. This example also illustrates the importance of building the capacity of local organizations to effectively use the time and talents of volunteers from overseas. Points of Light Institute is equipping a growing number of social entrepreneurs around the world with the resources and tools they need to launch volunteer-mobilizing organizations that also strengthen how local NGOs are leveraging volunteer talent.

I think these trends around international service are hopeful and can create new ways of creating scale and impact globally. So many things have changed in the last 50 years, but one constant is that we still need the idealism and creative energy of people to create change in the world.

One day I hope to return to my deferred dream to join the Peace Corps. Perhaps when I retire, I will be one of a hundred thousand inter-generational volunteers serving around the globe, changing our nation, the world and ourselves in the process.

To learn more about ServiceWorld, an initiative to help us achieve President Kennedy’s vision of 100,000 volunteers serving abroad each year and usher in new thresholds of global service, go to www.ourserviceworld.org.