The Points of Lights Disaster Services team has been on the ground in Flint, Michigan, meeting with volunteers, and contributing our expertise in volunteer mobilization and management. In their own words, many of the volunteers shared with us stories of neighbor helping neighbor, and the resiliency and determination of the Flint community in the aftermath of the lead water crisis. Here are just a few of the voices from the frontlines. 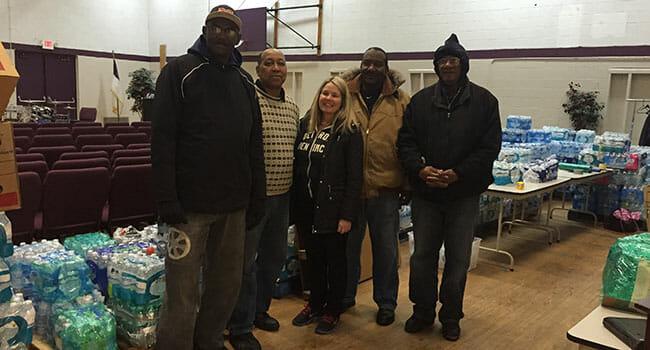 As director of the Volunteer Reception Center at the United Way of Genesee County, an affiliate of the Points of Light HandsOn Network, Rachel Wenzlick works alongside the American Red Cross and AmeriCorps NCCC to process hundreds of volunteers each week.

“I like to see the volunteers who are behind the water distribution, the recycling effort, and who are out there helping the community,” says Rachel.

Giving back also requires many sacrifices from the volunteers. Rachel reports that some of the biggest challenges the volunteers coming through the Volunteer Reception Center have faced thus far are cold weather, snow and overall weather conditions.

Like many of their neighbors in Flint, Jeff, Cookie and their son Malcolm started experiencing headaches, skin breakouts and stomach problems after drinking the city’s water. They believed they had the flu until a youth minister told them their symptoms might be caused by lead in their water. The family was able to get bottled water from a local food bank but realized that many of their neighbors lacked the information to do the same. In response, Malcolm developed better signage for the site to attract more residents. Soon after, the family decided to help when they saw the resulting spike in foot traffic.

Remarking upon his family’s creativity in helping the site where they were first clients, Malcolm says: “Crisis causes innovation and light will shine on the darkest issues. But Flint always bounces back.”

Today, the family volunteers weekly at their local food bank to deliver 40 pallets of safe drinking water to the local community. 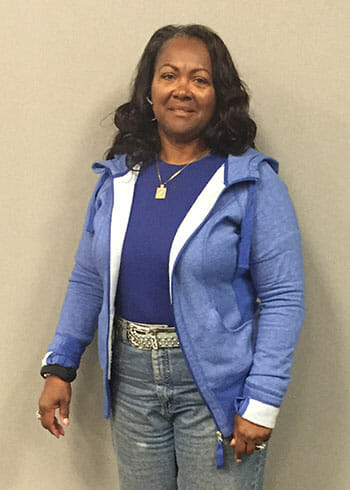 Sandra Jones and her husband, Roger Jones, Bishop of the Greater Holy Temple in Flint, oversee a state-managed water distribution for community residents through their church. The Convoy of Hope initially contacted them to request their help with distributing donated water to parishioners. Soon after, more people from around the country made more donations. Sandra and Roger report that residents come to them daily – 250-300 cars may drive up for water. Already, they have distributed more than 15 million bottles of water.

“I was never a server but I was a giver. This crisis has made me both. Spend a week volunteering with us and your heart and passion for the community will change,” says Sandra. “Don’t give up on Flint. I’ve seem more comradery come out of people since the water crisis has hit then I’ve seen in the past 15 years.”

In addition to water, the couple have also started distributing lead mitigating foods and personal hygiene items like diapers and toiletries. Sandra marvels that she has learned how to drive a forklift truck to move items around and provide work for volunteers.

“Well, it needed to get done,” she says.

Residents are relying on these services and are counting on Sandra and Roger. The distribution center is open six days per week, no matter the weather.

“There are a lot of trust issues in this community and folks have to decide if you are with them or against them before they will open their doors,” says Sandra.

Sandra has been fighting for Flint for years but in this most recent battle she had the support of a powerful ally, President Obama. In advance of the President’s visit in early May, the White House sent Domestic Policy Council Director Cecilia Muñoz to meet with Sandra and Roger. She knows that Ms. Muñoz listened because the concerns she shared on behalf of her community found their way into the President’s remarks.

Sandra and Roger say that resources are beginning to dry up and donations of water are slowing down, but they have personally contributed to purchasing equipment and providing food to volunteers to keep the operation going. 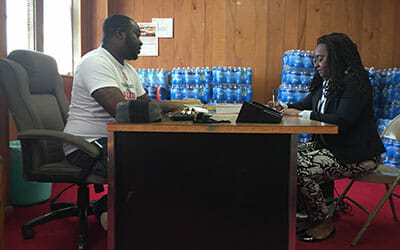 The congregation of North Central Church and the surrounding neighborhood are elders or retired, so James Greer and a few younger church members give out water five days a week. James, the church’s outreach coordinator, calls his volunteer work at the church “Labor of Love 2016,” but he’s been in love with Flint for as long as he can remember.

Greer went away to boot camp five days before his 19th birthday in 2004. He came home once a year and each year he noticed more and more of Flint disappearing. All of the schools that shaped his childhood are boarded up.

“To me, it is devastating,” Greer says.

Greer and a few members of the church started with just 20 pallets of water. Sixteen semi-truckloads later, he continues to lead volunteers to give away water. He remains committed to distribution efforts, despite working full-time on the 2nd shift – sometimes even pulling double shifts – because his community needs fresh water.

Once while loading water to a few cars he noticed that some folks were trying cover up how much they had been given. When he asked them why, he learned that a few distribution sites limit the amount of water per household. Greer told them to spread the word that anyone can get as much water as they need at North Central Church. Now, when people come to get free water in the church parking lot, they pick up for themselves and for their neighbors. 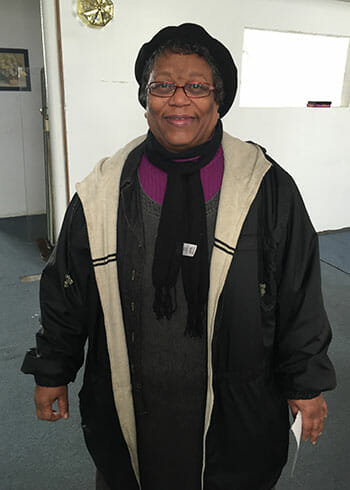 Moving back to Flint has been an adjustment for Gladis Sheron, who returned in 2012 to help care for her sick brother.

“It’s been a culture shock, the conditions of the city have changed dramatically—empty houses, torn down houses and houses without doors,” she says. “But that’s what we are here for. I really enjoy helping people.”

Gladis runs the Calgary Praise Church, serving a small community of parishioners. She worries about the limitations on water for bathing, cooking, drinking. Some residents stand in line for water and only get two bottles for water for the whole family. She believes that families should be given water on a weekly basis.

Volunteering is also a family affair for her.

“My cousin from Richmond, Indiana, came up with two truckloads full of water all collected from Richmond residents,” she says.

The Points of Light Disaster Services program activates volunteer efforts around the world to provide disaster relief. We partner with local and national organizations to establish Long Term Recovery Groups and mobilize volunteers as part of the ongoing effort to build more resilient communities. For more information, contact [email protected].