In honor of Veterans Day, this week we’re highlighting veterans serving their communities. This post is by Maj. Rebecca “BB” Lange, deputy legislative assistant at the office of the chairman of the Joint Chiefs of Staff. In September, Lange was awarded an AmeriCorps Alums National Leadership Award for her commitment to service. 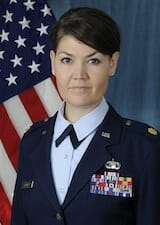 Sometimes, you need a push. Or a shove.

At 17, my parents told me I was on my own to pay for college. Partly because of the expense, partly because they believed I would appreciate a college education more if I earned it. With President Clinton’s 1995 State of the Union Address, I found a way.

When I heard the words, “…there are 20,000 Americans… helping people, solving problems and, in the process, earning some money for their education. This is citizenship at its best,” I was sold.

I took a leap of faith and signed up for the still-nascent AmeriCorps. I joined other young, idealistic, and eager 18-24 year olds in AmeriCorps National Civilian Conservation Corps. We tutored, built trails, painted houses and supported the 1996 Olympic Games. We made a difference to those around us.

And service made a difference for me. I used my AmeriCorps education award to pay my first tuition bill at the University of Colorado. AmeriCorps was also my launching pad to military service.  As a student, I became an Air Force ROTC cadet.

Here’s why: We put service before self. Military and civilian service members take an oath to serve a larger cause. One group pledges to defend the Constitution, the other to strengthen our communities.

Our country needs us and equips us to answer its call. Active civilian and military service members are united by a belief that we all have a role to play in our country’s story and welfare. We have a shared sense of responsibility – and the skills to serve as civic leaders.

We’re also changed for life. Military service is sometimes more visible, but service of all types has a profound and lasting impact on those who serve. Most Americans understand that those who have worn our uniform are trained to both lead and follow, to problem solve, and are inherently resourceful.

But, in the words of Gen. Martin Dempsey, the current chairman of the Joint Chiefs of Staff and principal military adviser to the president, “Less understood are the ways we continue to serve in our communities when we take off our uniforms… whether at the end of the day, or at the end of our careers.”

He’s absolutely right – and championing the similarities between civilian and military service is the perfect place to start.

Initiatives like the Aspen Institute’s Franklin Project, led by Gen. Stanley McChrystal and former Marine Jason Mangone, are doing just that. Leaders at Aspen, and their partner organizations, know that while some people need a push, or a shove, many are ready to leap into service.

As the war in Afghanistan winds down, thousands of veterans who understand service are hungry to continue solving our nation’s toughest problems – but we don’t have enough service opportunities available to them.

Each year, more than 580,000 applicants apply for just 80,000 AmeriCorps slots. The Peace Corps gets 150,000 applications for 4,000 full-time positions each year. Volunteering in America is on the rise and millennials are drawn to companies with “clearly-defined company policies on giving and volunteering.”

But I firmly believe that every single American is programmed – we are wired! – to serve our nation in our own unique capacity. I’m proud to live in a country where the demand for service opportunities is so great, but we must support efforts to ensure that all have a chance to serve.

Let’s share this story and give more people – military and civilian alike – a chance to leap.

This post also ran in The Huffington Post and on the AmeriCorps Alums blog. AmeriCorps Alums is the only national network connecting the nearly 1 million AmeriCorps alumni to the people, ideas and resources that support their commitment to a lifetime of service.