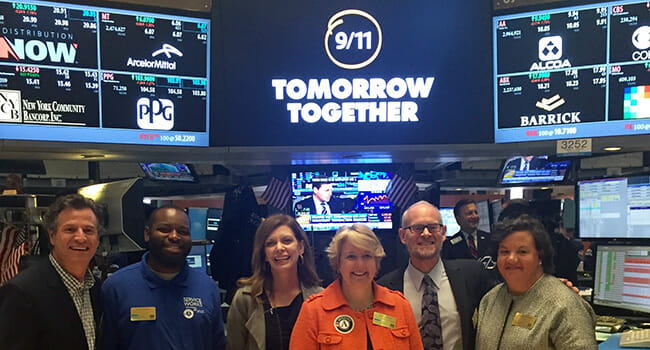 This morning, as part of a 9/11 Day commemoration, I had what anyone would consider a once-in-a-lifetime opportunity to stand with a group of service champions to ring the bell at the New York Stock Exchange. But what made it even more special was the chance to see it through the eyes of one of my fellow bell-ringers, Alonzo Warren.

Alonzo grew up in South Central Los Angeles. He’s the oldest of 10 children in his family. When he was just 7, one of his parents was laid off and the family was forced to move into public housing. Not long after, they woke up one night to the sound of glass shattering after a firebomb was thrown through the living room window. His home instantly went up in flames.

“We lost everything, generations of family photos, birth certificates, IDs, everything in the house except the clothes we were wearing but no one was hurt. We didn’t have much money, so we were forced to live in our car for a few weeks. It was really tough — a survival situation,” he told me.

As he grew up, Alonzo made friends and stayed away from gangs but still faced tremendous loss and challenges. In ninth grade, he witnessed first-hand a friend being shot and killed. In 11th grade, he lost another friend to a brain tumor. Alonzo says he would ride the public bus for hours, thinking about escaping it all. But as the oldest son, he had a tremendous sense of duty to his family and would always ride the bus back home. 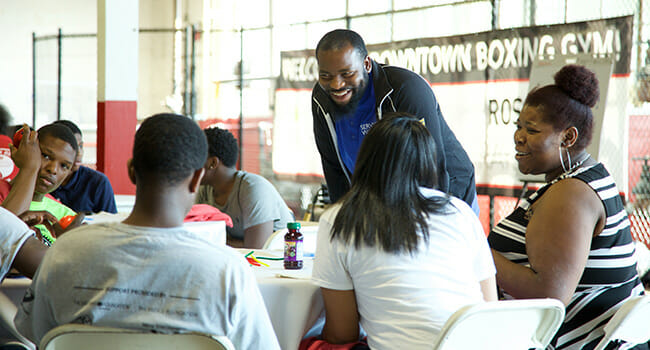 “Choice is the act of hesitation you make before you arrive at a decision,” he said. “That hesitation can be caused by anxiety, or it can be a moment for wisdom. I had some big choices to make — about where my life was heading, about how I was going to change the narrative for the better.”

In 11th grade, Alonzo started a youth program in his school that organized people to help improve the community. In 12th grade, he convened neighborhood meetings to talk about short-term issues and build a longer-term sense of place. After high school, he enrolled in a local community college and began volunteering to mentor younger kids.

As he continued his education and community work, Alonzo realized his purpose in life is his community and the young people he can help on their path to adulthood. “It’s very liberating to actually help your community — to help empower the younger generation to have a voice, and to change the narrative in their neighborhoods,” he told me. He calls his work “asset-based community development,” teaching the “assets” — young people — to find their passion and use their skills to build a better life and a better community.

Alonzo knows that young people today face many barriers to success, including something as simple as the ZIP code they live in. Many lack the soft workplace skills needed in today’s economy. Some don’t have or don’t know how to build a resume. Others can’t afford post-secondary job training or education – or are unsure about navigating the financial aid process. An estimated 1 million students drop out of high school each year. Others are young people involved in the justice system, teen parents or foster care children who aged out of the system without the support needed to create a clear plan for adulthood. 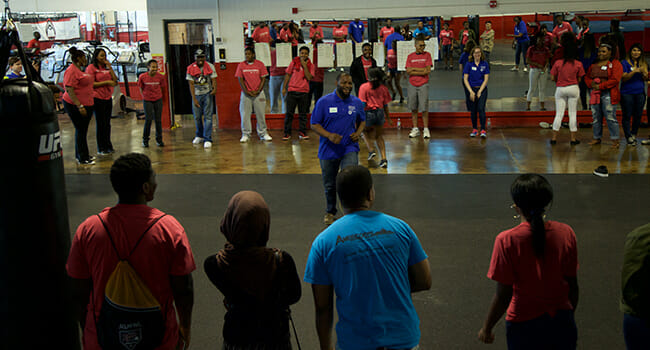 It’s the deep understanding of this reality that many young people face that brought Alonzo to the Points of Light family as an AmeriCorps VISTA member and site leader with ServiceWorks. We’re marking the start of our third year of this groundbreaking national program, powered by the Corporation for National and Community Service, the Citi Foundation and Points of Light. Through ServiceWorks, we use volunteer service as a way to help underserved youth and young adults in targeted U.S. cities develop the 21st century leadership skills they need to prepare for college and careers. And Alonzo has been with us from the start.

The program is a response to research that shows when underemployed opportunity youth design and run volunteer projects, they have a much better chance of finding good jobs. For example, Alonzo led a ServiceWorks team of young volunteers in designing a strategic approach to building community gardens. The project resulted in a fruit-and-vegetable bartering system between neighborhood blocks, nutrition for local homeless people, public awareness of water needs, and sustainability projects for local schools. At the same time, his team of young volunteers gained the leadership, project management, networking and other workplace skills they’ll need to get hired by local employers.

The ripple effect of a project like that is immeasurable. Not only does it help turn an inner-city food desert into a food oasis, it creates social capital, economic opportunity, and specific, measurable solutions to challenges today’s young people face. And it helps turn South Central LA into a place of opportunity for the next generation.

Watching Alonzo stand on the platform at the New York Stock Exchange to commemorate 9/11 as a day of service was the real once-in-a-lifetime opportunity for me. The bell ringing signals the start of another day of opportunity in trading and Alonzo’s achievements represent the great potential of his generation.

You can help change the future for opportunity youth. Explore opportunities to serve as a ServiceWorks volunteer and provide valuable coaching and mentorship to the leaders of tomorrow.