This post is by David Ross, a writer and graduate of the Andrew Young School of Policy Studies at Georgia State University. 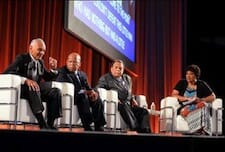 The Rev. C.T. Vivian had been on the buses with the freedom riders, protesting segregation at interstate bus terminals. U.S. Rep. John Lewis had been beaten after crossing a bridge in Selma, Ala., during a march for voting rights. Ambassador Andrew Young, an adviser to Dr. Martin Luther King, Jr., was in Memphis with Dr. King when he was shot.

The three recipients of the Presidential Medal of Freedom sat on a panel at Points of Light’s Conference on Volunteering and Service in Atlanta last month to discuss what volunteers can learn from the civil rights movement. Bernice King, CEO of the King Center and Dr. King’s daughter, served as moderator.

As Vivian explained, all three men started out with the intention of becoming ministers, “because we wanted to see people taken care of and not put down, and we thought that was important enough to put our lives on. … I think of when we got on those buses and left. Everybody on the bus with us that was white was going against the grain. But they were a part of justice, truth, and they were a part of making a new world. That’s what you need to be a part of.”

Lewis explained to Bernice King how he landed up on that bridge in Selma, where his skull was fractured by an Alabama state trooper: “Your father and others inspired me to get in the way and get in trouble, and I have been getting in trouble ever since. Good trouble, necessary trouble.” (Becoming a U.S. congressman didn’t change that, except today he tweets about it.)

Young, who preceded Lewis in Congress, told the thousands gathered in the audience, “We can change the world politically and economically one person at a time, but we each have to do what we are called to do.”

All three men encouraged the next generation of leaders in the audience to continue serving their communities even when it gets hard. “You must find a way to keep pushing and pulling, and be thoughtful and optimistic,” said Lewis. “Be bold. Be courageous. And be happy.”