Read about how folks in Salt Lake City, Utah, are preparing for disaster. To help your family take action, visit Good & Ready, where you’ll learn how to create a disaster plan, build a preparedness kit and more. 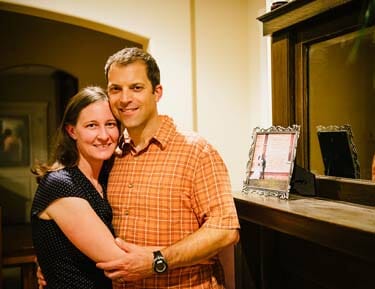 Emily and Jim Weigel stand beside the only part of their house that survived a 2010 fire, the living room mantle.

Just after lunch on July 26, 2010, Emily Weigel was startled by a banging on the front door. A neighbor warned that the house next to Weigel’s was on fire, so Weigel grabbed her baby – who was wearing just a diaper – and ran outside barefoot.

Within minutes, 10-foot-tall flames ripped into the second floor of Weigel’s Salt Lake City, Utah, home. She watched helplessly as fire burned everything in her house, grateful that at least her family was safe.

“Sure, I miss my wedding dress,” Weigel said, “but I’d rather have my husband and kids with me than a wedding dress.”

Weigel and her husband, Jim, learned that though they can’t predict when a disaster will strike, there are things they can do to prevent harm and minimize headache. Now, for example, they frequently check the smoke detectors in every room and have fire extinguishers at the ready.

To help Utahns and others around the country prepare for disasters, The Allstate Foundation and Points of Light have paired up to present a 14-city preparedness tour. After stops in Savannah, Ga., Baton Rouge, La., Colorado Springs, Colo., among other cities, the tour landed at the Hogle Zoo in Salt Lake City last Saturday. 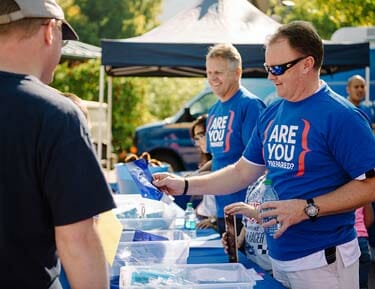 “The thing that is unique to Utah is that we have seasonal disasters,” said Gavin Seal, a Salt Lake City Allstate agency owner. “We have the wildfire season (June through October) and those living in the foothills or the mountains face that risk. Then, we move into winter. Last year, we had a series of extreme cold temperatures, which can cause a lot of destruction – from plumbing freezing to power outages. And finally, there’s the underlying risk of a catastrophic earthquake at any time.”

According to FEMA, 85 percent of Americans are unprepared for disaster, which can lead to the unnecessary loss of property and lives, Seal said.

The educational component of the event was helpful for Casey and Jillian Koon, who were reminded that they need to have clothes packed for themselves and their two children. 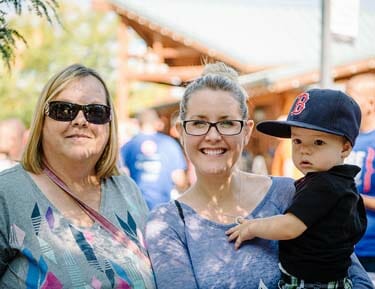 Autumn Shaw, center, came to learn about disaster preparedness with her mother, Paula, and son, Boston.

“They were helpful in telling us what extra supplies to pack, what things to think of and what to use in case of an emergency,” Casey Koon said. “Having kids heightens your awareness and definitely raises more concerns about making sure you have everything you need in case of emergency.”

Many locals receiving kits said they had previously either done nothing or too little to prepare. Autumn Shaw, who attended the event with her mother, Paula, and son, Boston, said she was not prepared for a disaster and was surprised about some of the items in her starter kit.

“I never thought about having a garbage bag and using that as a poncho or for sanitary reasons,” Shaw says. “I think that’s one of the last things you think about when you think about being prepared in an emergency – ‘Where am I going to go to the bathroom?’”

Supplies in preparedness kit were just a start. Volunteers encouraged Shaw and others to add food and water. The recommendation for a standard 72-hour kit is one gallon of water per person per day and food that is dehydrated and plentiful.