Central America is one of the toughest regions in the world to be a child. Poverty, violence and lack of opportunity are prevalent. Access to quality health and education services is limited. Migration from the region separates family members, and child migrants face life-threatening journeys. 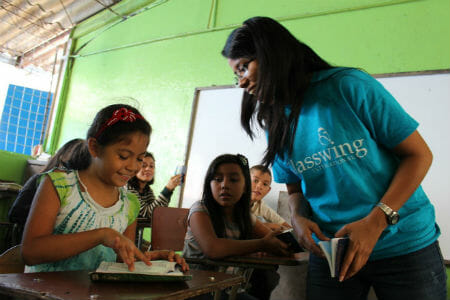 A Glasswing International volunteer teaches students during an after-school club at an El Salvador public school.

Despite these challenges, Glasswing International – part of Points of Light’s HandsOnNetwork – believes that Central America still holds the potential for great promise. The organization works to confront the obstacles its countries face in order to enable its children to thrive.

Since its founding in El Salvador in 2007, Glasswing has mobilized more than 85,000 corporate, community-based and medical volunteers. Through extreme school makeovers, after-school clubs, medical professional and first responder training, and community health projects, Glasswing volunteers have touched the lives of more than 600,000 people.

"Glasswing believes in strengthening communities’ existing resources, such as public schools, hospitals and health clinics rather than building anew," said Celina de Sola, Glasswing’s co-founder and vice president of programs. "Through the organization, volunteers have an accessible way of making a huge impact on the lives of children and youth in the region." 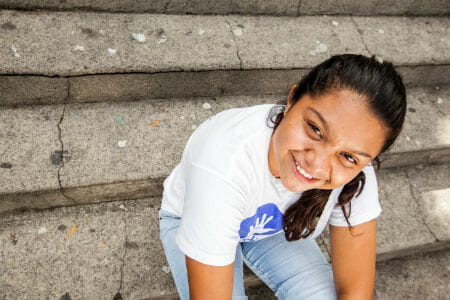 Ninth grader Claudia says participating in Glasswing International after-school clubs has helped her improve her attitude at school and better express herself socially.

Glasswing’s cross-sector approach forges partnerships with international and local governments, corporations, nonprofits and civil society. Although globally minded, the organization is locally driven, allowing the organization to design, implement and oversee all of its projects and accomplish more for less.

Ninth grader Claudia – who started participating in Glasswing after-school clubs four years ago – is one such student. The 14-year-old grew up in the Las Palmas neighborhood of San Salvador, an area defined by poverty and violence.

“Growing up in Las Palmas was difficult,” Claudia says. “I was very combative with my teachers and didn’t do well in school.” Now she’s a member of several clubs, including the leadership, debate and girls’ clubs.

“Participating in these clubs has made a positive impact on my life,” Claudia says. “They have helped me improve my attitude in school, and better express myself socially.”

Currently, Glasswing has permanent programming in six countries in Central America and projects in an additional eight countries in Latin America and the Caribbean. In 2015, Glasswing was invited to join the Clinton Global Initiative, an program of the Clinton Foundation dedicated to helping its member organizations maximize their social impact.

Interested in finding out what you can do to help Glasswing and the people it serves? Please visit www.glasswing.org.