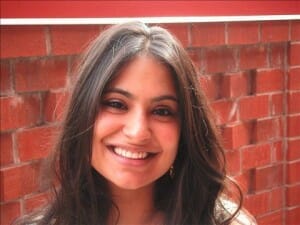 Today’s guest post is written by Faiza Kanji, speaker at our National Conference of Volunteering and Service in Chicago. Kanji is currently the General Manager, Volunteer Development at the YMCA of Greater Toronto.

I’ve been working in the field of volunteer engagement for 12 years. I can say with full confidence that I am living out my life’s purpose. This is the only career I’ve ever known and for a member of Generation X, I might be one of those few people who doesn’t change careers multiple times in my life. Why do I do what I do? It all began in Canada on October 3, 1972. I wasn’t even born but this was a day that changed the course of my life forever.

Rewind two months prior to August 4, 1972. My Mom and Dad were both 25 years old and living in Tororo, a town in Eastern Uganda. They were a young newlywed couple and 6 months pregnant with my oldest brother Karim. Mom was a nurse and Dad had a blossoming career in hotel management and hospitality. Their world was forever changed when former Ugandan President Idi Amin issued a decree expelling 60,000 Asians from their birthplace of Uganda. This act of ethnic cleansing came with a condition of giving Ugandan Asians 90 days to leave the country or else. Or else what? I’m not sure really when I hear stories of police brutality, corruption, murder and abuses of the worst kind that took place immediately after the decree. Luckily, my Mom and Dad had family in England and in Canada, two countries who had opened their borders to those that had been expelled. My pregnant Mom went to England right away and stayed there to deliver my brother Karim. Dad had planned to wrap a few things up before following my Mom to England so he could be there for the birth of my brother. He was victim to his own individual hardships as a result of corruption amongst local authorities. He’s only ever talked to me twice about a painful day that he experienced that had him escape to England sooner than he planned. I can’t even imagine what my 25 year old Dad was going through and where he got the strength to envision a future for his family in Canada.

Dad missed the birth of Karim and arrived on Canada on October 3, 1972 to set about building our family’s life. Four months later, Mom and Karim joined Dad and for the first 6 years of their life in Canada, my parents grew their family (my brother Aneez came first and then me) and moved from one community to the next trying to figure out where they could work and where they as newcomers could establish security for their young family. In the Canadian context, a newcomer is a person that is newly arrived. It has no socio-economic, cultural or political connotation. It simply denotes how long your feet have been on Canadian soil.

This year, on October 3, 1972 our family will celebrate 40 years of building a life and legacy in Canada. My parents don’t really talk about leaving Uganda and what that was like for them. Perhaps, at 25 they weren’t able to process all that was happening to them. Maybe they are trying to protect us from realities they hope are never ours. What I do know is that they’ve lived in Canada longer than anywhere else in their lives. Canada is home. Canada, a country built on immigrants, diversity and global influences is also a place where they learned to belong as newcomers through receiving kindness from volunteers. Canada has also been a place where they can actively and freely contribute as volunteers. My sense of belonging comes from witnessing my Mom and Dad in various incarnations as volunteers. As new Canadians, they were leaders in the Canadian Scouting movement. My Mom took on various leadership roles in our mosque. My Dad chaired a provincial Association of Dry Cleaning Professionals and showed me what leadership looked like. They’ve taken their decades old experience as newcomers and turned it into learning and support for newly arrived Central Asians to Canada. My Mom spends her weekends promoting heart health in the South Asian community. Dad visits a senior’s home once a week and has gone back to school to learn how to be a teacher so that he can compete for meaningful volunteer roles as he prepares for retirement.

From a very young age, Faiza Kanji’s parents instilled in herself and her brothers a strong sense of volunteerism. They, as immigrants to Canada 40 years ago, made a successful transition into Canadian life with the help of many kind and generous volunteers. A volunteer herself from a very young age, Kanji has successfully managed volunteers at the Aga Khan Foundation Canada (AKFC), Youth Employment Service (YES) the Canadian Breast Cancer Foundation (CBCF) and Surrey Place Centre. Kanji believes strongly that a community with a sound sense of volunteerism and a committed volunteer base improves the overall quality of life and health of all its members. Kanji will present at Why Volunteer? Introducing Youth to Volunteerism.