Captain Sir Thomas has always been active, even driving every day until he slipped and fractured his hip two years ago. The care and after-treatment he received then, and earlier through a cancer scare, left him eternally grateful to so many people in the National Health Service.

When the coronavirus pandemic struck, Captain Sir Thomas wanted to give something back to the healthcare staff putting their lives on the line for all of us.

£38.9 million later, he has inspired a whole nation, and drawn praise and admiration from all around the world. People were rooting for him from the four corners of the globe.

Just as importantly, thanks poured in from NHS workers all over the country. Captain Sir Thomas was especially touched by that. He has become a national treasure and a national hero, but sees himself as anything but.

He vowed to keep on walking until his 100th birthday and then move onto his next challenge. The Captain Tom Foundation launched in 2020 to carry on his journey to inspire hope where it is needed most. 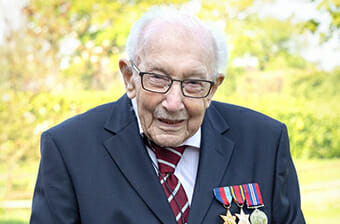