In November 2017 Heidi Magyar was appointed to a newly combined position at General Motors as executive director of corporate giving. In this role, Magyar oversees the integrated social impact, community relations and employee volunteerism initiatives.

Prior to this, Magyar was director of community outreach programs, leading a team that included GM’s ever-growing teamGM Cares employee volunteer program, GM Student Corps and other community volunteer activities in Michigan and the U.S.

Formerly she was the communications manager for the president of GM North America and other product and technology leaders. In this role, she created and implemented public speaking and media relations strategies for GM’s senior executives.

She joined GM in 1997 as a communications coordinator for the former Oldsmobile divisions followed by Saturn and began her career at EDS Corp. as a customer assistance advisor for Oldsmobile.

In 2016 she was appointed as a Commissioner by the governor of Michigan to the Michigan Community Service Commission which utilizes service as a strategy to address the state’s most pressing issues and empowers volunteers to strengthen communities. Magyar also serves on the Board of Points of Light an international nonprofit dedicated to engaging more people and resources in solving serious social problems through volunteerism. 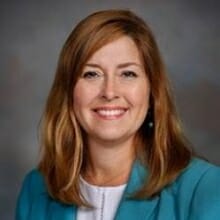