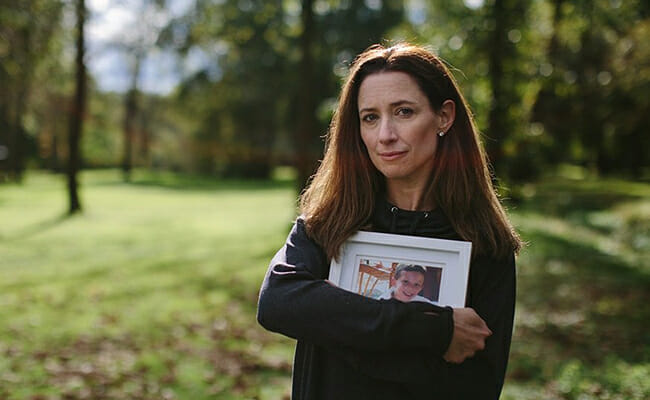 “Even though he is no longer physically with us, we will always be Aidan’s parents,” said Christy Silva, who lost her son to sudden cardiac arrest in 2010. “The work that we do through his foundation allows us to nurture his spirit and to sustain his legacy. It’s our way of assuring that his heart beats on.”

It was Labor Day in 2010, and Christy was dressing her children, 7-year-old Aidan and 4-year-old Devin, for a neighborhood picnic. Suddenly, Christy noticed that Aidan had left the room and was lying on the floor in the hallway. “I thought he was goofing around, playing the ‘sleeping game,’ so I walked over, leaned down, and tried to tickle him,” she remembers. “He was lifeless, and when I turned him over, he was blue.”

Christy started CPR, and at some point, she scooped up her oldest child and ran to the home of a neighbor, who was a nurse. Resuscitation efforts continued, and Christy called 911. Paramedics tried to shock Aidan’s heart back into rhythm, and he was transported to the local hospital. Christy and her husband, Steve, arrived behind the ambulance and soon were given the devastating news: Aidan had apparently died from sudden cardiac arrest.

Sudden cardiac arrest is the unexpected loss of heart function, breathing and consciousness. No warning signs or symptoms are usually present, and victims usually appear to be in perfect health just seconds before they collapse. SCA results from an electrical disturbance, or “short circuit,” in the heart that disrupts its pumping action, stopping blood flow to the brain and other vital organs. Not thought of as a major malady in children, SCA struck 7,037 youngsters in the United States last year, with only 10 percent of the victims surviving, according to the American Heart Association. It is the No. 1 killer of high school athletes on school grounds in the country, claiming the life of one young person every three days.

“It was so hard for us to grasp. He had just had his well-child visit at the pediatrician’s office six weeks before his death, and everything was fine,” said Christy Silva. “I vividly remember Aidan high-fiving our pediatrician. How could this have happened to our seemingly healthy child?” Even more disturbing for Christy and her family was the discovery that 70 percent of conditions that cause SCA in children can be detected by a simple, quick, non-invasive routine electrocardiogram, or EKG. But EKGs are not standard protocol in pediatric medicine, so it was not even considered as part of Aidan’s routine check-up.

During the months that followed Aidan’s death, Christy and her husband struggled with how to sustain his memory and put their overwhelming grief into some form of action.  The following spring, the family held the first 5K for Aidan J., which raised nearly $20,000 to support efforts in providing free EKG screenings for children in local schools.  Christy was determined to do much more than just provide free heart screenings, however. When she learned that the chances of survival decrease 10 percent every minute after a heart stops, and that the only way to restart a heart in arrest is with a small, easy-to-use machine, she became committed to increasing the availability of automated external defibrillators, or AEDs, in schools and other facilities frequented by children. She also aimed to make CPR training more available in her community.

That first 5K fundraiser became the impetus for Aidan’s Heart Foundation, which was established in 2013 to provide awareness, education, and support to communities of the southeast Pennsylvania region and its surrounding area to create heart-safe communities for youth in the prevention of and response to sudden cardiac arrest.  The organization partners with pediatric cardiologists to screen young hearts with EKG exams that can detect underlying heart issues. It continues to facilitate the placement of AEDs in schools, youth athletic organizations, and other public facilities, and coordinates with local medical professionals to provide free CPR-AED trainings to young people, parents, teachers, and coaches.

“Aidan has been gone now longer than he was alive,” said Christy. “Had it not been for the overwhelming support of our friends, family, community, and schools, none of our work would be possible.” 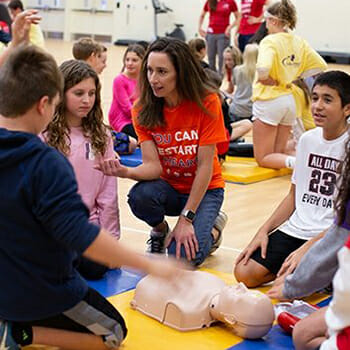 Christy’s work has had tremendous impact on the health and wellbeing of children in southeast Pennsylvania. Through the Aidan’s Heart Foundation, she has coordinated EKG screenings of 1,800 youth, detecting potentially life-threatening heart conditions that went previously undetected in 25 children, and facilitated the purchase and installation of more than 85 AED units across her community. She has also trained more than 5,000 sixth-grade students and 400 adults, including parents, teachers and coaches, in life-saving CPR-AED skills. And thanks to Christy’s determination, new state legislation known as Aiden’s Law now ensures that all schools in Pennsylvania are equipped with updated AED devices.

Christy took a very personal tragedy and turned it into a life-saving mission so that her son’s legacy could live on. Although she lost her own son, her efforts have led to an increased awareness of this critical health care concern, and to potentially saving the lives of an untold number of children in her community.

“Mrs. Silva is so special because not only is she teaching life-saving techniques to her community, but she empowers young teens like myself,” said Tiegan Brown, a student who went through CPR/AED training sponsored by Aidan’s Heart Foundation. “She has inspired me to make a positive impact on my community by taking a tragic loss and transforming it into something amazing.”

Christy took a very personal tragedy and turned it into a life-saving mission so that her son’s legacy could live on. Although she lost her own son, her efforts have led to an increased awareness of this critical health care concern, and to potentially saving the lives of an untold number of children in her community.

Do you want to make a difference in your community like Christy? Visit All For Good for local volunteer opportunities