Meet Daily Point of Light Award honoree Bruno Serato. Read his story and nominate an outstanding volunteer or organization as a Point of Light. 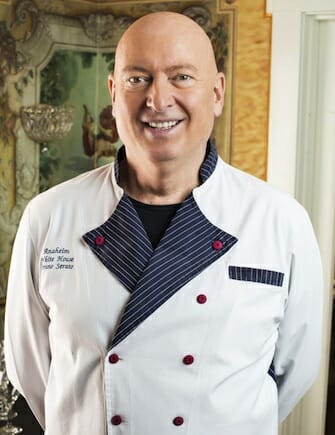 When Bruno Serato was a boy growing up in Verona, Italy, his mother, Caterina, always made sure that the family dinner table was “abbondanza,” groaning with food. After coming to California in his 20s – with just $200 in his pocket and a fervent desire to learn English – he wound up staying to embark on a career in the restaurant business.

He worked his way up from dishwasher to busboy to waiter to manager to, finally, restaurateur. Since 1987, he’s been making sure that everyone who comes to his upscale Italian steakhouse, Anaheim White House, leaves happy and plenty sated.

It took a visit from his mother, though, to help him understand that not everyone goes to bed each night with a full stomach.

“My mom had come to my restaurant for a nice lunch and we were just finishing our espresso, and she said, ‘What should we do now?’” Serato, now 59, recalls.

He knew his mother loved children, so he suggested they visit the Boys and Girls Club nearby.

“There was one kid who was eating potato chips and the director explained to us that that was probably going to be her dinner,” Serato says. “We were kind of shocked.”

Serato remembers this conversation with his mother:

“Why don’t you bring her to the restaurant for a big bowl of pasta?” she asked.

A decade later, Serato distributes close to 1,500 bowls a day to feed children at some two dozen locations throughout Orange County, California. In fact, his program – named Caterina’s Club, after his mom, who passed away last year – recently handed over a steaming plate of pasta to its 1 millionth kid.

“My mother would be the happiest woman in the universe to know that we have served so many children,” Serato says. “On the other hand, she was such a very humble woman that she would think it crazy to see that we have been featured on CNN and on Italian television.”

Three years ago, the club received nonprofit status, making it eligible to receive grant money; before that, Serato funded everything himself.

Serato, who doesn’t have children of his own, says with a laugh, “I have 1,500 children every day.” The reaction from “his” kids is his greatest reward, he says, adding, “They act like I have three Michelin stars. They are my best reviewers.”

Because many of the kids who spend time at Boys and Girls Clubs have no stable homes – often bedding down instead in a series of motels – Serato recently started another program, Welcome Home. The effort, which provides the first and last months’ rent so that households can get situated in apartments, has so far helped almost 90 families, or 500 people.

“Our children are the future of America,” says Serato. “We all need to take care of them.”