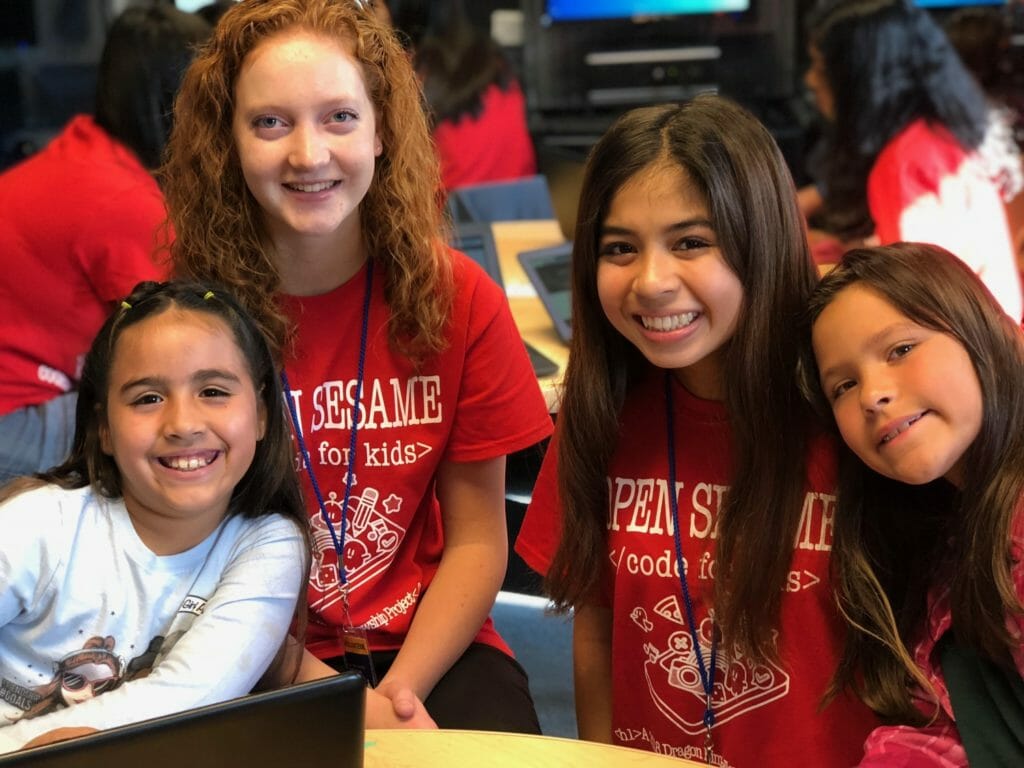 Not many teenagers can say they have impacted the lives of hundreds of children, much less grown an organization from the ground up in less than a year. But when childhood friends Katherine McPhie and Milan Narula decided to combine their talents for coding with their passion for volunteering, they were able to do just that. In July 2018, the duo founded Open Sesame Coding for Kids, an organization of high school and college students who go to homeless and domestic violence shelters throughout Orange County, CA to teach kids computer coding. Since then, the organization has grown to over 130 student volunteers who have taught about 385 children the skills to build a better future.

Open Sesame not only teaches kids how to code, but also helps to build their confidence. Some of the children at the shelters don’t know how to use a computer at all, Milan said, before working with Open Sesame, which through grants were able to donate Google Chromebooks to the shelters for the kids to work on. And the friends don’t want this outreach to end — they hope to expand to more areas in the future to help build the computer skills of even more children.

For their contribution to enriching the lives of disadvantaged children, Milan and Katherine are today’s Daily Point of Light Award honorees. Points of Light spoke with them about their creation of Open Sesame.

Describe what you do with Open Sesame.

Katherine: We go into homeless shelters and domestic violence shelters and we teach the kids there computer coding.

Milan: Basically a session is usually anywhere from one to three hours. We like to have a one-to-one student-to-teacher ratio. So each tutor there will be working individually with each kid so they can go as fast or as slow as they want.

Katherine: At each session, what happens is the tutors come in a little bit earlier, we set them up at computers, log them on and get them onto the coding website. Then all the kids come in, each kid sits next to a tutor and then for the rest of the time, they’re just working one on one with the kids.

What inspired you to start Open Sesame?

Milan: I did about two years of tutoring with homework at a domestic violence shelter.

Katherine: Someone once told me that to find a good way to serve the community, you should find an area where your interests or your talents overlap with a need in the community and I think that describes coding perfectly. We had experience with coding and we realized it’s a skill that could help children lift themselves out of poverty because coding is the future.

What kind of feedback have you gotten from the kids and shelters?

Katherine: It’s been very good feedback for the most part because coding is a useful skill but it’s also very fun because we’re teaching it in a fun way, with games and other things like little puzzles that the students can work on. So I think it’s been very fun for them as well.

Milan: I think when they first hear that we’re going to teach them coding, they’re kind of intimidated, but then once they start doing it they think it’s really fun. And they also think it’s really cool that they’re learning something so advanced. 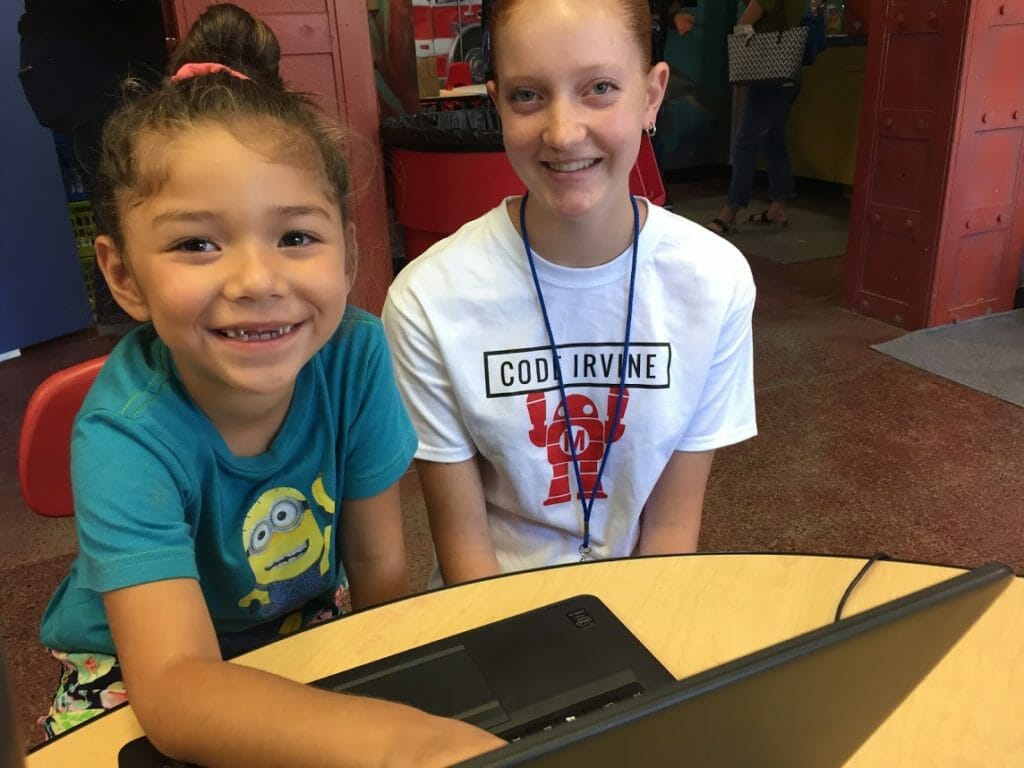 What are your hopes for the kids you’re working with?

Milan: Personally I just hope they’re more confident when it comes to computers and when it comes to anything kind of in this range. I hope they know they can overcome these challenging tasks and they’re smart enough to figure things out.

Katherine: That’s exactly correct. I think that for these kids, they’re often a couple years behind in school, [and] doing something like coding can be a really big confidence boost for them because they can realize they’re good at this, this is something they can do and it can help them that way as well.

Has your work with Open Sesame had any effect on what you want to do in the future?

Milan: I actually discovered that I really like working with kids and I would like to be a teacher. And without Open Sesame I definitely would have not figured that so I’m very grateful for that.

Katherine: Absolutely. I really love working with the kids and I really like this combination of doing the coding and also using that to help other people so I’m thinking about maybe a career in computer science. Also, I would like to continue volunteering and doing other things with kids.

Milan: I would say it’s just seeing how much the kids have grown. We stay at pretty much the same shelters. Once we start, we keep doing sessions. Seeing the kids — from some of them starting off not knowing how to use a computer, not knowing how to use a mouse — and then seeing them get really good at coding, it’s just kind of amazing seeing the impact.

Katherine: It would pretty much be the same for me. When you have a kid who says, you know coding isn’t for me, and they’re really reluctant at first and they don’t think they can do it, and then when a couple weeks later that kid is so proud to see what they’ve been able to do and they get this really big smile on their face, that is really great to see. 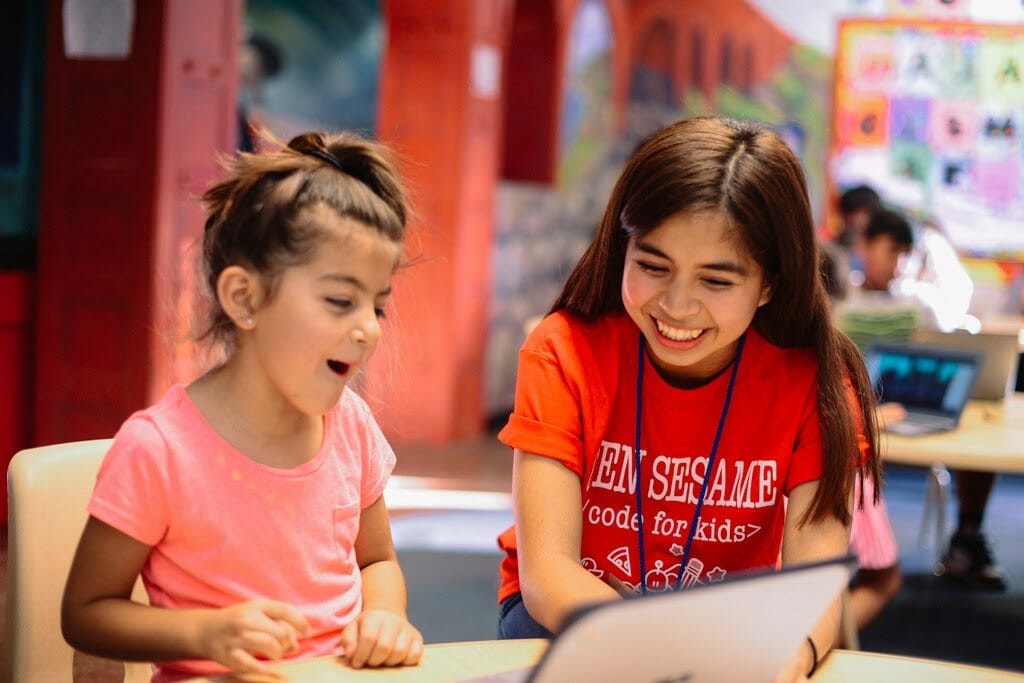 Katherine: I think when you have something that has brought you joy and you also think will be useful to you later on in life, it’s really good to share that with other people. And not only is it good for other people, it’s also good for yourself. I know doing this has definitely helped me as well as helped the kids I’ve been working with. I think it’s really been great to share this thing I love with them.

Milan: We also acknowledge that we are really lucky. We live in nice neighborhoods and go to nice schools and we have the resources that we’ll always need. And so it’s kind of an eye opener to see some areas where they don’t have that kind of stuff, and it’s really important to give back.

Katherine: I’d say that you can make a difference no matter what it is. I never imagined our program could grow this big when we started it and it’s been really amazing to see that growth and to see what we’ve been able to do. And other people can do this as well.

Do you want to make a difference in your community like Katherine and Milan? Visit All for Good for local volunteer opportunities.

Today’s turning point story is written by Anne Royse Ginther, a founder of RandomKid.  Anne is a 2009 Women of Worth honoree.…

Happy New Year! Thinking about what family volunteering projects you want to do this year? Find resources below, republished from findananny.net blog…