In celebration of International Volunteer Day, Dec. 5, we honor Ivan and Torrae Owen of Washington state with a Daily Point of Light Award. Through their compassion, ingenuity and global collaboration, the Owens are helping to bring low-cost prosthetics to those who need them around the world. 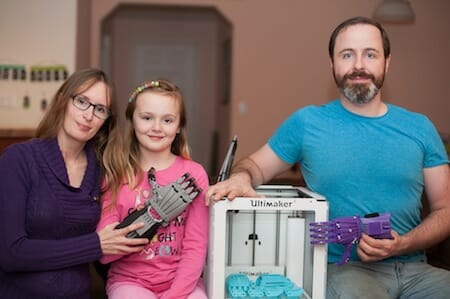 Ivan Owen, right, with his wife, Jen, and daughter, Torrae

Since his early teens, 30-year-old Ivan Owen has been an artistic nomad – moving from playing guitar to learning sculpture to designing movie props. A few years ago when he found himself building marionettes, he posted a video of his latest project, a giant mechanical hand with semi-articulated fingers.

That post would spark a movement that became known as e-Nable, a global community of inventors dedicated to sharing their efforts to help make affordable prosthetics.

Owen’s video caught the attention of Richard Van As, a South African carpenter who had lost several fingers on his right hand and was looking for help using his skills to build his own device.

Over the course of nearly a year, the duo embarked on a long-distance collaboration, testing and refining until they had a functional index finger. 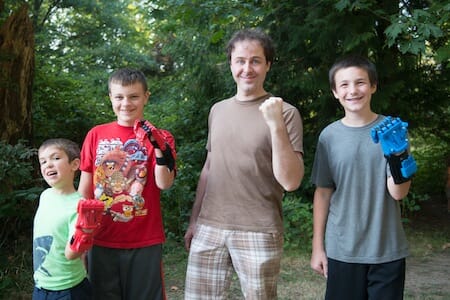 Ivan Owen, center, poses with Keegan Bair, of Oregon, Ben Stephens of Washington state and Dawson Riverman of Oregon after Owen taught them how to assemble their own hands.

They posted a video of their creation online and someone offered to donate frequent flyer miles so Owen could fly to South Africa to actually meet with Van As. Around the same time, the mother of a 4-year-old who was born with no fingers on his right hand sent an email:

“Could you create an entire set of fingers?” she asked, adding, “We live in South Africa.” Suddenly, Owen’s trip assumed new urgency.

“I was due to be in the country for just three days,” he says, “In that time, we had to come up with a design and start building its components. I worked on fingers, while Richard worked on the palm and forearm.”

By the time Owen left South Africa, the team had a working prototype that would allow the boy to slide the device over his own palm and use his wrist to manipulate the fingers.

Made of metal and plastic, the device cost about $300 to build, compared with similar products on the market retailing for about $5,000.

But because children grow so quickly, the team continued looking for cheaper alternatives.

“That led us to use 3-D printing, and our first printable prototype cost $150 in materials,” says Owen, who runs a 3-D printing lab at the University of Washington, Bothell.

To help reduce the cost further, Owen and Van As decided to release the intellectual property rights and make everything available for free download.

Other tinkerers noticed and shared their own experiments. Soon, Jon Schull, a research scientist at the Rochester Institute of Technology, started a forum to bring designers, researchers and users together and e-Nable was born.

Today, about 7,000 people from 45 countries are part of the network.

From the start, Owen’s daughter, Torrae, 10, has been a key contributor. Owen calls her his “ever-patient guinea pig from day one. … As she’s gotten older, she’s taken an active interest in learning to build hands and in teaching others to do so.” (See video above.)

Depending on the model, a typical hand contains about 25 components and takes between eight and 20 hours to print and then two to three hours to assemble.

So far, about 2,000 devices have been produced and delivered free of charge, according to Owen. Present models are being made for about $35 to $50 from printers that can cost as little as $2,000 or are available in libraries and other centers for free or for per-hour rental.

“This is a drop in the bucket compared to the need – there’s about a million amputees of all sorts in America alone,” Owen says. “But it’s a great start.”

Know an outstanding volunteer, a family who makes volunteering a priority or an organization that calls upon volunteers to change the community? Submit a Daily Point of Light Award nomination today!